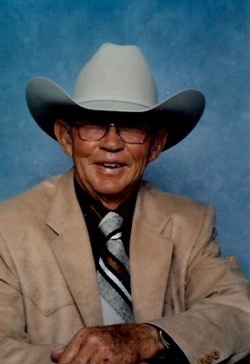 Funeral services for Johnnie M. Jones, 86, of Julesburg, Colo. will be held on Thursday, Nov. 5, 2015 at 2:00 p.m. at Chamberlain Pier Funeral Home in Gordon, Nebraska. Burial will be at the Gordon Cemetery.

He was born on May 4, 1929 in Chadron, Neb. to Guy and Mamie (Grant) Jones. As a young man he lived north of Chadron. When he reached the 8th grade he graduated and began to work on local farms and ranches.

On Dec. 14, 1947 he married Karen L. Koutzen. The couple lived in the Dawes County area until Johnnie began a long career in ranching. In 1948, the couple was blessed with their only child Candace.

The couple moved to the Sandhills in 1954 to begin working as a ranch hand at the Red Deer Ranch until 1954. Then he went to work for Buckley Ranch in Rosebud, S.D. from 1957 to 1960. He then moved back to the Sandhills to work for Abbott Ranches as a manager from 1960 to 1968. In 1968, Ceresal Ranch leased the Abbott Ranches where he continued to be a manager until 1974. In 1975, Martin Enterprises leased the Abbott Ranch until 1977. In 1978, he went into partnership with Martin Enterprises until 1985 while still managing the ranch.

Johnnie enjoyed being outside working with cattle, horses, and doing manual labor. In his younger years he enjoyed rodeoing and moved on to the Old Timers Rodeo Association. He enjoying being around his family, his grandchildren, and his friends.

A memorial has been established. Donations may be sent to Chamberlain Pier Funeral Home, PO Box 336, Gordon, NE  69343.

Chamberlain Pier Funeral Home is in charge of arrangements.