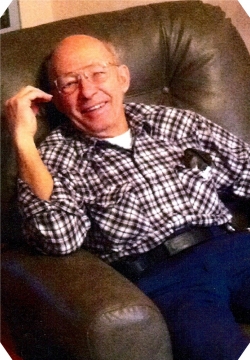 He was born Aug. 24, 1933 in Norden, Nebraska, to John Frederick and Evelyn Marie (Smith) Burton. He graduated from Alliance Public School then joined the Army from 1953-1955. He was stationed at Fort Ord, Fort Lewis, and Camp Kilmer throughout his service. After the service, he went to Milford Southeast Community College where he studied Auto Body Repair.

On August 9, 1958, he married Betty Lou Maltsberger, in Scottsbluff, Neb. The couple lived throughout Nebraska and Iowa and finally settled in Rushville, Neb. where Loyd started Burton Body Shop.

Loyd was a member of the American Legion and the N.W. Vintage Car Club where he held the treasurer position. He was also very active in the school and took pride in flipping pancakes for Rushville High School for over 20 years.

He always had a passion for vintage cars and took great pride in his 1947 Lincoln, 1941 Plymouth pickup, and his new obsession, 1951 Hudson. He also enjoyed showing off his classic cars in various car shows and participating in Rushville Fun Days.

Loyd was always very proud of his children and grandchildren’s accomplishments and he made sure to support all of their activities. With numerous grandchildren, Betty and Loyd were always traveling across the state to show their support.

Services will be 2 p.m. Tuesday, Nov. 10, 2015, at the Rushville Methodist Church with Pastor Paul Smith officiating. Burial will be at Fairview Cemetery immediately following the service.

Pallbearers will be his 14 grandsons.

The family suggests memorials to C.A.R.E. and donations may be sent to Chamberlain-Pier Funeral Home, PO Box 366, Gordon, NE 69343