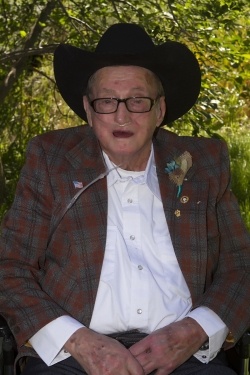 Bill was born to Ralph and Nancy Shrewsbury on Dec. 27, 1921 on their family homestead north of Lakeside, Neb. Bill met the love of his life Betty Morris while stationed in Amarillo, Texas and they were married on Sept. 8, 1946.

Bill began ranching at a very young age, his father homesteaded at the ranch north of Lakeside and both Bill and his brother Bert were very active in all aspects of the operation. When his father passed away in 1938 Bill took over the ranch with his mother. As the ranch continued to grow Bill and Betty purchased land north of Ellsworth and grew their herd that originated from a single 4H heifer. His grandsons Justin and Rhett began helping Bill run the ranch as he got older and Bill turned the operation over to them when he retired from ranching in 2007.

Bill was also very well known for his rodeo legacy. Bill was a phenomenal calf roper and team roper. He made many rounds on the local and state circuits and as he got older became very active in the old timers rodeo circuit as well. Bill went on to fuel the passion and love for cattle, horses and rodeo in his grandchildren and great grandchildren. In his later years he spent many hours at ropings, rodeos, and junior rodeos supporting them.

Bill won many gold buckles during his rodeo years and was inducted into the Nebraska Sandhills Cowboy Hall of Fame in June of 2014. He also received the Ak-Sar-Ben Good Neighbor Award that he was particularly proud of. Bill lived a life that truly defined what it means to be a cowboy and to live the western life. Bill’s legacy will live on as his family now sports the many gold buckles he won and continue his traditions in ranching in rodeo.

Bill was preceded in death by his wife Betty, his parents Ralph and Nancy Shrewsbury, his brother Bert Shrewsbury, and grandchildren, Schan Worley and Chet Whaley.

Funeral Services will be held Tuesday, Dec. 1, at 10:00 a.m. at the United Methodist Church in Alliance. Pastor Tom Lucas will officiate. Burial will be at the Lakeside cemetery. Visitation will be at the funeral home on Monday, Nov. 30 from 10:00 a.m. to 6:00 p.m.

Memorials may be given to East Point Horspice or to a charity of the donor’s choice. They can be sent in care of Justin Shrewsbury, 605 Cheyenne, Alliance, NE, 69301.

Online condolences may be left at www.batesgould.com. Bates-Gould Funeral Home is in charge of the arrangements.