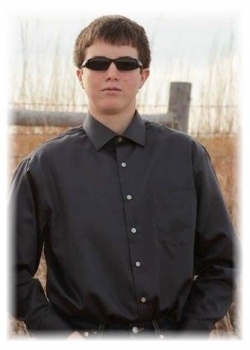 Lane was a junior at Gordon-Rushville High School. He was very curious, imaginative and interested in so many things that it was hard to keep up with him. The GI Joes or marbles would suddenly turn into cattle and it would be branding time. Lane attended youth group at Church of God, the Presbyterian Church, Pleasant Point Church and most recently at the Wesleyan Gospel Chapel. He hunted, fished, played baseball, football, basketball, wrestled and raced lawn mowers. He had a great love of animals.

He will certainly be remembered for his pink wrestling shoes, as well as his skill. He was in dance class and 4-H. Lane was also a poppy volunteer. Lane loved the family gatherings and especially the Easter gathering at the ranch home, because after dinner he would spend the rest of the day shooting clay pigeons.  Lane was a collector and loved the auctions at the Legion Club.

He was always happy and had a joke to tell and loved to pull pranks on people. His friends were a special part of his life.

He was preceded in death by is grandfather Mack Malmberg, great-grandmother Thelma Hartman and great-grandfather Voldey Dahlquist.

A Celebration of Life was held Wednesday December 2, 2015, 10:00 am, at the Gordon-Rushville High School. Burial was held in the Gordon Cemetery.

A memorial has been established and donations may be sent to First National Bank, PO Box 290, Gordon, NE 69343.