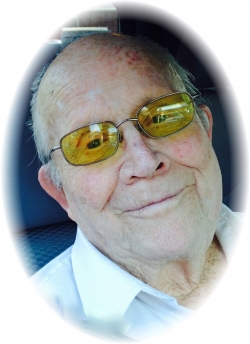 James Franklin Vahrenkamp, 88, of Chadron went home to the Lord Dec. 23, 2015. He was born near Whiteclay, Neb. at home to Bessie and Herman Vahrenkamp on Sept. 9, 1927. He attended the Extension School through 10th grade. The family moved to Colorado where he graduated from Salida High School. While in high school he played football and met June Francis Bell. They married July 9, 1946 at his parent’s former home in Wellsville, Colo.

The newlyweds lived north of Hay Springs in a log cabin where Jim worked for his brother-in-law, Elmer “Bud” Cilek. Sons Michael and Marc were born at that time. Jim moved the family to the ranch/farm south of Hay Springs in 1952 where they raised the boys and two daughters, Jamie and Jackie. They also raised registered Herefords, hogs, sheep, alfalfa, wheat and lots of corn.

Jim was a 60 year Master Mason and a 30 year 4-H leader. He actively volunteered on the Dawes County Extension Board, 4-H Council and Fair Board, treasurer of Hay Springs Methodist Church, and District 56 school board. He helped start the Hay Springs Rodeo Club and played polo.

In 1978 they moved to a ranch south of Valentine. Jim said those 14 years were the best as he could enjoy ranching and raising cattle. Since the ranch bordered Merritt Reservoir he renewed his love of fishing.

Jim and June moved to Chadron in 1992 to be close to all of the grandchildren. They enjoyed going to the grandkids’ school activities, sports events, rodeos, county fairs and later, the great grandkids baseball games. Jim also enjoyed coffee shop hour, playing pool and cards, hunting and expanding his fishing activities.

He is preceded in death by his parents, brother Bill, and sisters Helen and Hermie.

A Celebration of Life will be 2:00 p.m. Monday, Dec. 28 at the Chadron Berean Church, 407 Shelton Street, with Pastor Charlie Busch officiating. Ashes will be returned to the hills at Marc’s ranch north of Hay Springs in June. Honorary pall bearers will be grandsons Jim, Jeff, Robert and Andy Vahrenkamp; Caleb and Cort Goffena, Nick and JD Keim, and all Jim’s friends.

Donations may be given to his memorial of choice, The Gideons International, and sent to Chamberlain Chapel, POB 970, Chadron, NE 69337.