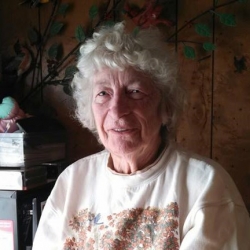 Lilly was born Jan. 8, 1928 in Iowa to William and Josie Deckert, the first of five children. At two years of age they moved to a ranch near Porcupine, S.D. where she grew to adulthood. Her life of hard work and adventure had begun. She lived in many different towns; working sometimes no less than two jobs to feed her six children. At 33 years of age she moved back closer to home, to Gordon, Neb., where she met Bull (D.W.) White. After their marriage the family moved to Martin, S.D.

Bull was a Legionnaire so naturally Lilly became an Auxiliary member, being active for many years.

In 1970, they moved to Batesland, S.D. to work for Shannon Co. Schools and she also became a member of the town board. After almost 20 years of employment she retired to ranch life back in Porcupine with her oldest son and her younger sons joining her in later years. She never really retired as anyone who stopped by could attest to. She was never one to set idle.

She did take many trips with various family members and special family friends. One of her biggest hi-lights was going to the Bull Riding events with her friend Cathileen in Colorado, and trips with her Aunt Joan Saxton to visit relatives.

In later years as her health declined, she moved to Rapid City, where she passed away with family at her side, holding her hand, telling stories of her adventurous life.

Lilly was preceded in death by her husband, Bull (D.W.) White, her parents William and Josie Deckert, her uncle Max Deckert, brothers Fritz Deckert and Lloyd Deckert, one son, Virgil Kelley, one grandson Robbie and one great grandson Rueben.

Memorial services will be held Saturday, Jan. 30, 2016, 11:00 a.m. at the New Legion in Martin, S.D. Inurnment will be held at a later date. A memorial has been established for the Martin American Legion Auxiliary and donations may be sent in care of Bennett County Funeral Service, PO Box 65, Martin, SD 57551.