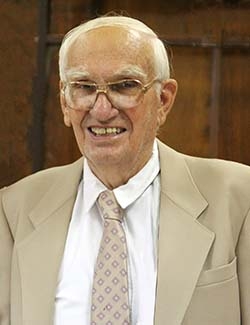 Eugene (Gene) Raymond Kleve was born on January 24, 1933, to Joseph and Nellie (Peters) Kleve in Nenzel, Neb. He was the fifth child of eight children. He grew up on Mirage Flats and graduated from Rushville High School in 1951. Eugene met his wife Betty Koch in 1957 at a dance in Hay Springs. They were married April 18, 1958, in Alliance and lived there until 1964, when they moved to Aurora, Neb. In 1969, they moved to Scottsbluff and lived there for about 19 years. Gene returned back to Alliance in 1988. For most of his career, Gene worked at local Nebraska Ford dealerships until his retirement from Cover-Jones Ford in Alliance, Neb. in 2003. Gene was well-known for his great memory of people he had met over the years and enjoyed running into them at work and around the local area. He also takes with him the vast majority of the history of the family.

Gene is preceded in death by his first wife Betty (2013), his parents; his sisters Teresa Malgren, Barbara Kleve, Margaret Kleve, and Lois Reed; his brother Francis Kleve; and his daughter Karen (1994).

Funeral Services were held Monday, January 25, at Holy Rosary Catholic Church. Cremation followed the service and burial will be in Calvary Cemetery at a later date.