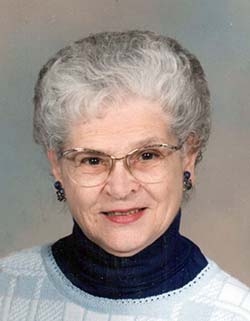 Margaret had worked at JM McDonald and JC Penny as a bookkeeper.  She was an active member of the First United Methodist Church, York.

She is survived by her husband Paul of York; son Steven (Pat) Nelson of Alliance, Neb.; daughters Mary Hase (Tommie) Teahon of York and Jean (Roy) Thompson of Hebron; grandchildren: Dawn Hefner and Mark Fassler of St. Cloud, Minn., Desiree (Tim) Kelly of Lincoln, Neb., Erin (Jason) Stigge of Plattsmouth, Neb., Jason Hefner of York, Brenda (Gary) Nuss of Sutton, Neb., Kevin Mohnike of Sutton, and Christopher (Emily) Nelson of Alliance; and ten great-grandchildren.  She is also survived by her sister Marjorie (Denzil) McClatchey of York, special friend, Dee Magnussen and her daughter Andi of York, and several other nieces, nephews, and in-laws around the U.S.

She was preceded in death by her parents, brother Charles, and sister Mildred.

Funeral services were scheduled for Monday, February 1, 2016 at the First United Methodist Church, York. Burial followed in Greenwood Cemetery, York.  Visitation was held on Sunday from 1-9 p.m., with family greeting friends that evening from 6:00 - 8:00 p.m. at the mortuary.  Memorials may be directed to the family for later designation.  Condolences may be left for the family at www.metzmortuary.com.  Metz Mortuary, York is handling arrangements.