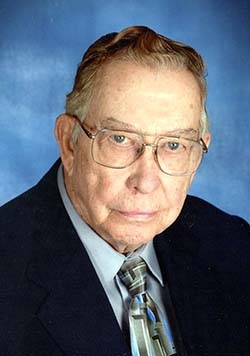 Dormond E. Metcalf, 84, of Grand Island went to be with his Lord and Savior on Sunday, February 21, 2016 at his home near Grand Island.

Jacobsen-Greenway Funeral Home in St. Paul is in charge of arrangements.

Mr. Metcalf was born July 16, 1931 at Burwell, the firstborn son of Earl and Geneva (Miller) Metcalf.

Dormond was raised on the family farm that was homesteaded by his grandparents. He attended Oxford District 13 Elementary School in rural Custer County and graduated with the Class of 1949 from Sargent Schools. Following graduation, he worked locally until 1952 when he enlisted in the U.S. Navy, proudly serving his country in Guam and Adak, Alaska as a Seabee during the Korean War. He was honorable discharged in 1956.

On October 24, 1954, Dormond was united in marriage to Bonnie J. Powell at Weissert, NE. This union was blessed with four children: Sheri, Steven, Shelley and Scott.

In August of 1956, Dormond continued his education receiving a Bachelor’s of Science degree from Kearney State College and a Doctorate of Medicine from the University of Nebraska Medical School in 1964 followed by an internship with Bryan Memorial Hospital in Lincoln. In June 1965, the family moved to Gordon, NE where Dormond began his lifelong dream of becoming a rural family doctor. In 1981, Dormond accepted a position as Director of Patient Services in Fort Riley, KS.

He had the opportunity to move back to Grand Island in 1985 where he completed his medical career serving at the Veteran’s Hospital, achieving Chief of Medicine and retiring in 2000.

He was a 60-year member of the United Methodist Church, Board Certified Life Member of the American Academy of Family Practice, American Medical Associaton and the Gordon American Legion. Dormond also served as medical examiner for the Federal Aviation Association.

Deep patriotism for the country compelled Dormond to reenlist in the U.S. Army Medical Reserves from 1981-1994, where he attained the rank of Colonel. Dormond took great pride in his Command of each individual member in his 82nd Unit.

Dormond enjoyed the outdoors; hunting, fishing, traveling, flying and “projects”. He further appreciated history, music, reading, woodworking and was a proponent of lifelong learning. Dormond cherished his friendships and enjoyed conversation. An avid lover of animals, Dormond always surrounded himself with a multitude of 4 legged companions.

Left to cherish his memory are Bonnie, his wife of 61 years of Grand Island; daughters and sons-in-law, Sheri and JD Rickertsen of rural Sargent and Shelley and Steven Brune of West Point, NE; a son and daughter-in-law, Scott and Lisa Metcalf of Grand Island; grandchildren and spouses, Prairie and Nate Miles, Carly and Brian Blakely, Heidi and Kurtis Abbott, Hannah and Jeff Selko, Mikayla and Grant Wiese, Jonathon, James, Mary and Madeline Brune, Andrew, Cody, Cassaudra and Candice, Metcalf; 11 great-grandchildren; a brother and sister-in-law, Ted and Barbara Metcalf of LaMirada, CA; brothers-in-law and spouses, Bill and Gerry Powell of Gordon and Gary and Janice Powell of Lincoln; nieces; nephews; cousins and many friends.

He is preceded in death by his precious son, Steven; parents; brothers, Wayne and Lynn Metcalf; three infant brothers; and one infant sister; and father-in-law and mother-in-law, Claude and Gail Powell.