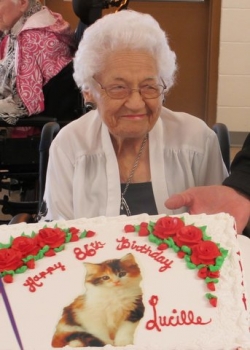 Lucille Helen (Lehman) Michaelson was born on February 24, 1926, at the Rushville Hospital. She joined her parents, Nick and Lillian Lehman and her sister Eleanor; two brothers Bill and Dick later joined the family. She grew up with her family on the Lehman ranch, north of Rushville and attended grade school by the ranch. She graduated from Rushville High School with a teacher’s certificate that she took advantage of for a couple years.

One of Lucille’s early experiences was a trip to California with a couple of her cousins. While there she worked in a factory that manufactured airplanes for the war. On January 4, 1946, Lucille married her sweetheart, Richard Michaelson in Alliance, Nebraska. They then left for Panama to start their life together where Richard worked for the US Navy,

In the spring of 1950, the family moved back to Nebraska and lived on and operated the Michaelson farm 10 miles north of Rushville. Lucille was very busy with raising 3 boys and preparing meals for everyone. She learned early on to kick the 3 young ones out the door so she could get her work done.

After Lucille got the three boys out of her house she became the librarian for a mobile library that traveled to the rural schools in Sheridan County. This was a job that she greatly enjoyed. She came to be known as “The bookmobile lady.” And carried that name affectionately by many of the children into their adult lives.

Later in life, due to health reasons Richard and Lucille moved into the yellow house on the corner in Rushville. They lived there until further health issues came and they moved to Pioneer Manor in Hay Springs. In 2013, she lost Richard after 67 years of companionship and missed him every day.

Lucille made many friends at Pioneer Manor. She always had a smile for the staff and residents.

Lucille was preceded in death by her husband, parents, brother and a sister, four brothers in law and five sisters in law.

Lucille will be remembered as a loving and caring person to her family and friends. She always had a kind word and smile on her face.

A memorial has been established for Pioneer Manor or the Clinton Methodist Church Women. Donations may be sent to Chamberlain-Pier Funeral Home, PO Box 366, Gordon, NE 69343.