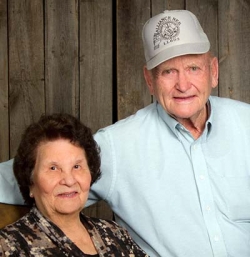 He was born November 2, 1934 in Hillrose Colorado to Floyd and Catherine (Stroud) Groce.

He served in the US Army from March 28, 1958 thru May 28, 1960. Following his discharge, he worked for the CB&Q Railroad, also enjoying ranch work and later retiring from Dinklage Feed Yard. Retiring at the age of 62, he took great pride in helping his two grandsons’, Tyrel & Witt Clark operate a lawn mowing and snow removal business. He enjoyed teaching them everything that he knew, from mechanic work to carpentry. He wanted them to feel the satisfaction and integrity of a job well done.

He was preceded in death by his parents, wife, infant son Marvin Gerald Groce, and brothers, Hallie Groce, Vern Groce and Dave Wright.

Memorial services for both Marvin and his wife, Thelma who passed away April 30, 2015, will be Saturday, March 19, 2016 at 2:00 p.m. at the Bates-Gould Chapel with Reverend Don Mink officiating.  Burial will be at a later date at the Nebraska Veterans Cemetery at Alliance.

Memorials may be given to a charity of the donor’s choice.