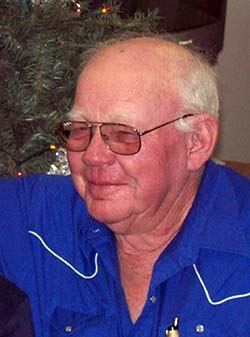 Bill Powell, of Gordon, NE, joined his Lord and Savior on March 19, 2016 at home surrounded by his loving wife and daughters.

Bill spent his boyhood years on the family farm, which was homesteaded by his Great Grandfather in 1878. He attended country school, graduating from Broken Bow High School in 1953. Bill started working for Everett Brown’s ranch in Cherry County where he met and married his first wife, Patricia Perrett in 1958. He was drafted into the Army in 1958 where he served for 2 years in Germany before being discharged in 1960. Upon returning home Bill and Pat worked and lived on Fred G. Perrett’s ranch in Valentine, NE.

To this union 3 daughters were born, Raye-Lynn Marie, Tracy Kaye and Corynn Barbara. They enjoyed a carefree life tagging along with their Daddy, helping with the cattle drives and other chores on the ranch.

Bill was a Master Mason at the Minnekadusa Lodge #192 in Valentine, NE, the same time his brother Gary held the same position in Lincoln, NE. Bill was also a member of Farm Bureau. He took carpentry and welding classes at the local high school in the evenings.

After some years Bill moved to North Platte NE to start his carpentry career. There he met and married Geraldine Dixon, April 12, 1980 in Weissert, NE. The Powells moved to Gordon, NE in 1981 to continue his carpentry work, working for Bob Mathis. Soon after Bill started his own business being a handyman and cabinet builder. There was nothing he could not fix. There are many kitchens, decks, additions, windows and doors around Gordon that Bill installed or built. He was known as being a perfectionist making sure everything was just right.

Bill served on the city council and was active in the Pheasants Forever for many years. He was also a member of American Legion Club.

He enjoyed playing cards and visiting his many friends, each having their own nickname. Many good times were had in his shop, swapping stories and laughing so loud it was heard in the house. He liked coffee hour and especially enjoyed the “breakfast group” that met twice a week after he retired.

Memorial Services were held March 23, 2016 at The Church of God, Gordon, NE. Inurnment burial will be at a later date in Weissert, NE.

The family suggests memorials to C.A.R.E. which can be sent to Chamberlain-Pier Funeral Home PO Box 366, Gordon, NE.