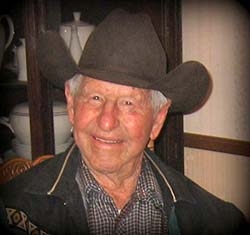 He was born October 27, 1929, at home near Mullen, Neb. to Chester and Grace Skanadore.

As a young child he lived with his family at the “homestead” in the Nebraska Sandhills and several other locations south of Gordon. After leaving high school, he worked on different ranches in the winters and helped his dad with contract haying in the summers.

On November 6, 1950, Bob married Joann Macumber at the Gospel Chapel in Gordon with Neal Phipps officiating. Bob went to the Army in the fall of 1951. When he returned from the service, they farmed and ranched southeast of Gordon where they raised their three daughters. After retirement in 1998 they moved to their acreage just east of Gordon.

Bob did his basic training at Camp Crowder, Mo. From there, he was deployed to Korea where he served on the front line. In October of 1952 mortar fire hit his bunker. He was wounded by shrapnel and evacuated to Japan. He called this his “million dollar wound” as that sent him back to the states. Bob was awarded the Purple Heart and the Bronze Star.

While his daughters and grand children were in 4-H, he was a leader in the Niobrara 4-H club. He especially enjoyed working with kids as they trained their horses. In his later years, Bob shared his passion by saddling a horse or harnessing a buggy for his grandchildren and anyone who showed an interest.  His friend, Ron Dorsey, got him interested in driving a team of donkeys and an “adopted” granddaughter Jessica kept him young and riding until his cancer made it impossible.

Bob loved his retirement home with its great view of the sunrises, sunsets, and watching his donkeys and horses. He was a kind and caring neighbor and friend who was always willing to lend a helping hand. He was Uncle Bobby and Grandpa Bob to more than just his immediate family. His family was his pride and joy and his generosity with his time and talents was an inspiration to all.

Funeral services will be held at 10:00 a.m. on Saturday, March 26, at the Wesleyan Gospel Chapel in Gordon with Jason Hurd and Tom Peppel officiating. Burial will be at the Gordon Cemetery with military honors.

An account for memorials to the Gordon Senior Center and the Wesleyan Gospel Chapel has been established at the First National Bank in Gordon, PO Box 290, Gordon, NE 69343.

Chamberlain-Pier Funeral Home of Gordon, was in charge of arrangements.