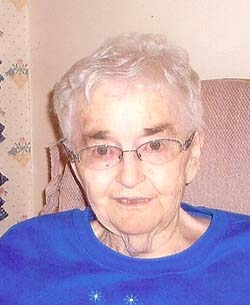 Cathryn Janssen went home to be with the Lord on Monday, March 28, 2016, with peace and grace at the ParkView Lodge in Rushville. She was born on May 6, 1931, in Rushville, Neb. to Fredrick and Faye (King) Schupbach.  She graduated from Rushville High School in 1949.  Cathryn was a very kind, loving and caring wife, mother, grandmother, great grandmother, sister and friend.  She was known for her laughter that was full of happiness and contagious throughout the town.

Cathryn married Martin Janssen January 23, 1950, in Rushville NE.  Cathyrn and Martin made their home in Rushville with their children Carolyn, Gary, Judy and Jim.

Cathryn was a very hard worker, she for many years was a Homemaker and then worked at various locations throughout Rushville including the Sheridan County Treasure Office, Ideal Market, Nebraskaland Motel and the Rushville Public School in the hot lunch program for many years.

Cathryn enjoyed spending her time with family and friends, with family get-togethers, dancing the night away, shopping ‘till you drop, and eating cherry crunch and Kit Kats. Her favorite times were full of laughter and having her kids and grandchildren around.

A memorial has been established for the Rushville Volunteer Fire Department or Parkview Lodge in Rushville, donations may be sent in care of Chamberlain-Pier Funeral Home, PO Box 366 Gordon, NE 69343.