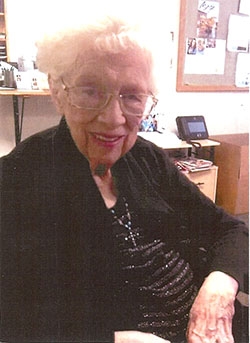 Funeral services will be held Friday morning, April 8, 2016, at 10:00 a.m. at the First Presbyterian Church in Gordon, Nebraska with Reverend Al Trucano officiating. Burial services will follow at the Gordon Cemetery.

Doris Margery Taylor was born August 13, 1920 in Osmond, Nebraska to Lewis and Margery Taylor. She graduated from Gordon High School in 1938 and attended Colorado Women’s College in Denver, Colo. for two years, receiving a business degree.

Doris worked in the family owned grocery store business. After receiving her business degree, she worked at the Gordon State Bank, which is Bank of the West. She married Carey Spangler in 1950. They lived on the ranch at Batesland, South Dakota and had a residence in Gordon. In 1957, Carey died and Doris actively managed the ranch until the fall of 1977. She retained ownership of the ranch but leased it out.

Doris was a member of the First Presbyterian Church and the Presbyterian Ladies Group, Book Club, American Legion Auxiliary, and several bridge clubs around town. She also helped to care for her mother until her death at age 103. Doris enjoyed playing bridge and entertaining family and friends. She loved her home, the ranch, and living in western Nebraska/South Dakota.

She was preceded in death by her parents, husband, her brother, Wayne Taylor, of Gordon, and her sister, Jean Finkey, of Scottsbluff, Neb.

A memorial has been established to the First Presbyterian Church, Gordon Volunteer Fire Department, or Donor’s Choice. Donations may be sent to Chamberlain-Pier Funeral Home, PO Box 366 Gordon, NE 69343