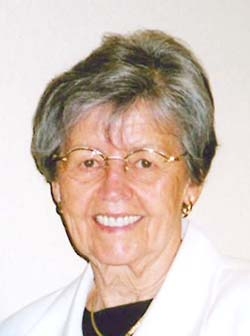 Rosemarie Ingeborg Sommer was born June 3, 1928 to parents Hermann and Maria Sommer, in Korntal, Germany (near Stuttgart). This talented, remarkable woman was the third of eight children in a family of four boys and four girls. She was a teenager and the oldest girl in the family during WWII. With her father away at war, much of the domestic work fell on Rosemarie’s shoulders to help her mother and younger siblings at a very dangerous moment in history. Much of the area where she lived was bombed and this family lived with the daily threat of war. Rations were short and the family had to manage with very little, as she learned at that early age to make something special out of practically nothing.

After the war, she met her first husband, Heinz Albrecht and they were married December 9, 1950. Seeing little future in their homeland during those post war years, they emigrated to Canada. They first lived in Winnipeg and later Toronto. These were difficult years as they both worked various jobs. On August 23, 1955 a daughter, Ingrid was born. In 1959 they emigrated again, to Denver, Colo. Heinz’ aunt owned a lamp store and she employed both of them. He made and repaired the electrical lamps while Rosemarie designed the lamp shades.

This marriage eventually ended in divorce and the single mother was forced to work hard to provide for her daughter. She worked at Aspen Leaf during this time. This high end retailer offered quality ski and sporting goods. While there, Rosemarie worked in sales and as a clothing model.

A rancher from Merriman, Neb., William “Bill” C. Arnot was a co-owner of a condominium in Dillon, Colo. It was there in 1967 that they met during an informal gathering. Rosemarie didn’t really want to attend, but her prodding daughter Ingrid talked her into going. As the rest of the story goes, Bill and Rosemarie were married on Dec. 1, 1967. The mother and 12 year old daughter quickly moved from urban Denver to the Half Diamond Lazy U Ranch in the Sandhills of Nebraska. Ingrid quickly learned how quiet country life compared to the noises of the city. She also left a class of hundreds, for a one-room country school where she was the only student in her grade.

Rosemarie’s infectious personality gained her many dear friends in this new land and she quickly adapted to life on the ranch. Ingrid did likewise as a teenager and soon attended Gordon High School.

Ranch life suited Rosemarie well. At age 42 she gave birth to her second child, Thomas, on May 28, 1970. She rejoiced in 1974 when Ingrid married John Fairhead and moved to his family ranch north of Merriman. Thomas attended the same country school as Ingrid and graduated from Gordon High School, as did his father many years earlier. As the years went by, Rosemarie loved the role of a grandmother, living just 15 minutes away.

In 1998 she and Bill sold the ranch and moved to the Black Hills near Rapid City in 1999. As always, she put her special touch to the new home, yard and garden.

Rosemarie enjoyed her friends and family and loved hosting elaborate dinners for them. She had a style and elegance that endeared her to friends of all kinds. She was a master gardener and even the trimmings tossed over the yard fence flourished, which multiplied the area of yard and garden she lovingly cared for. Rosemarie also had a great knack for sewing, knitting, and photography.

A very important aspect of Rosemarie’s life was her faith in God. In the early 1980s, a church in Dillon, Colo., began the turning point of her faith journey. She remained very active in various churches and women’s Christian groups.

Declining health in later years challenged her style somewhat, but not her loving, outgoing nature. Rosemarie passed away April 9, 2016 at the Hospice House, Rapid City, S.D. She was predeceased by her parents and two brothers. She is survived by her husband, Bill Arnot, two sisters and two brothers living in Germany, one sister living in South Africa, daughter Ingrid (John) Fairhead of Merriman, Neb., son Thomas Arnot of Denver, Colo., four Fairhead grandsons and families, including three great-grandchildren.

A memorial service will be held at the First Assembly of God Church, Rapid City on Friday, April 15 at 2:00 p.m., with a grave side service in Merriman, Neb. on Saturday, April 16 at 1:00 p.m. The family suggests any memorials be made to the Alzheimer’s Association (www.alz.org).