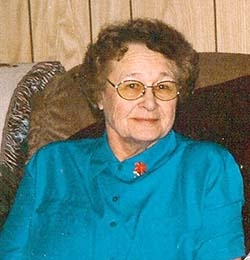 Evelyn was born to Leo and Edith (Hart) Furman on April 7, 1928 on the ranch southeast of Rushville. She began her education at the country school near her home and later transferred to Rushville, where she completed her first two years of high school. She earned her high school diploma in Laramie, Wyo. and then went on to attend the University of Wyoming.

She met and soon married the love of her life, August Vincent, on December 1, 1947. To this union a son (Roger), and daughter (Maxine) were born. She worked beside August on the ranch until his death in 1990, she continued working on the ranch until her move to Pioneer Manor in 2015.

Evelyn had a love for cattle and all aspects of ranching. She also enjoyed hunting, listening to old western music, watching movies, reading and bird watching. Christmas and Halloween were her favorite holidays.

Memorial services will be held at 2:00 p.m. on Friday, April 22, 2016 at Fairview Cemetery, Rushville, Neb. A fellowship will follow at the Rushville American Legion.

A memorial has been established for the Rushville Public Library and donations may be sent in care of Chamberlain-Pier Funeral Home PO Box 366, Gordon, NE 69343.