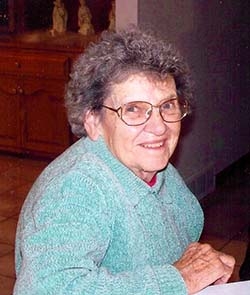 Jeanette was born January 17, 1929 in the small town of Madison, Mich. to Ray and Marie Brooks. She was raised by Jim Smith and Sue Smith on their ranch near Rushville, Neb. As she was the only child, Jeanette had a very active childhood and the Smith’s gave her the nickname “Sunshine”. She helped with chores, cooked, traveled and attended country school. Jeanette graduated from Hay Springs High School in 1946.

Jeanette married Sam Hinn February 18, 1947. After they moved to Smith Ranch they began their family and were blessed with three children, James, Robert, and Jeanie. Jeanette was very active on their ranch and was well known for her home cooked meals, as well as her fabulous yard and garden. It was not unheard of for her to make a full course meal of fried chicken, mashed potatoes and gravy, and fresh baked pies and rolls for twenty people and take it out to the hay field.

When Jeanette wasn’t cooking or helping on the ranch she spent her time with friends and neighbors at numerous organizations. Celia Ostrander Barth and Jeanette were leaders of the Smith Lake 4-H Club for several years. Many happy afternoons were spent crocheting or knitting at the Smith Lake Hobby Club. As a member of the Federated Garden Club she thoroughly enjoyed taking care of her beautiful yard full of flowers and large garden. Jeanette was also a member of the American Legion Auxiliary and the Morse Memorial Methodist Church of Rushville.

Sam and Jeanette lived and worked 42 years on their ranch until Sam’s passing. At that time, Jeanette moved to Rushville, Neb. and then to Pioneer Manor in 2010. She is proceeded in death by her parents, husband Sam in 1989, son Robert in 2009 and brother Arnold in 2016.

The 119 year legacy of Smith Ranch carries on through fourth generation family.

Visitation will be from 1:00 to 2:00 p.m. Thursday, April 28, 2016, at Pleasant Point Church with graveside services immediately following. In lieu of flowers, memorials may be made to Rushville Fire and Rescue or Plains Theatre. Donations may be sent in care of Chamberlain-Pier Funeral Home, PO Box 366 Gordon, NE 69343.