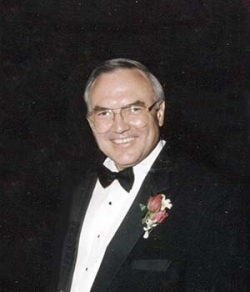 Derby-William (Bill) Harris Scott, M.D., 75, of Derby Kansas passed away peacefully at his home on May 16, 2016. He was born on January 11, 1941 in Chadron Nebraska to Orie Harris and Helen Barbara Vondra Scott. He graduated from Hay Springs High School in Hay Springs Nebraska, having developed a strong work ethic growing up on a farm as the only son.

Dr. Scott helped to establish as heart catheterization, echocardiography, stress testing, nuclear cardiology, cardiac rehabilitation and coronary “step-down” unit at St Joseph Medical Center. He had a passion for teaching and served as Volunteer Clinical Assistant Professor Internal Medicine Department at the University Of Kansas School Of Medicine from 1977 to 2002, specifically educating residents at St Joseph Family Practice in many aspects of cardiac disease. He lectured to medical professionals over the years on the subjects of congestive heart failure, coronary spasm, and cholesterol and electrolyte management. He also developed a successful private practice as a solo practitioner in cardiology and general internal medicine services until his retirement in 2007.

He then volunteered his time at a free-clinic in Wichita Kansas. When he was not at the hospital or office he could be found in his beloved numerous vegetable gardens and orchards. He used an organic method long before it became mainstream. He routinely grew far more produce than he could consume for the love of watching things grow and surprising others with the fruit of his labors. He was also an avid photographer. This passion was fed during his service in Japan where he bought the first of many cameras; he began shooting pictures at the Winter Olympics in Sapporo Japan and never looked back. His favorite subject was nature but family and friends attest to the many candid and posed shots he took of them. He also loved reading, hiking, Dutch- oven cooking, hunting and travel. He wore a bright smile on his face, had a quick hand to help those in need, and a true love of others, whether stranger or long-time friend.