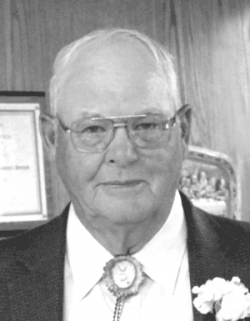 Donald Earnest Powles, 77, passed away on May 24, 2016, at the Great Plains Regional Medical Center in North Platte, Nebraska, following a heart attack.

Don lived his entire life in the Bingham Area on the family ranch.  He and his sister were the last graduating class from Bingham High School in 1956.  He served a short time in the Army, returning home to marry Gretchen Eileen Pisel on June 3, 1962, and of that union three children were born.

Don was a lifelong rancher who enjoyed a great conversation and lived for a good game of cards.  He was a calf roper and team roper in his younger days and more recently loved cheering for his grandchildren as they competed in various activities.  A Master Angler, Don was an avid fisherman and also enjoyed hunting and the outdoors.  He was a member of the Cowboy Chapter of the Fellowship of Christian Athletes.

Don grew up raising horned Hereford cattle with his dad.  They participated in the Cow Town Hereford Bull Sale for years then Don began a new venture in the early 1970s breeding Gelbvieh cattle with longtime friend Phil VanDervoort.  Don bred Black Imprint, the first Homozygous Black, Homozygous Polled Gelbvieh bull.  Buster, Polled Midnight, Black Velvet, and Jetstream were some of the bulls that made the Powles Gelbvieh Ranch.  He was an active member of various cattle and breed organizations throughout his ranching career.

Funeral services will be Saturday, May 28 at 2:00 p.m. at the Bingham Lutheran Church with Pastor Andrew Safarik officiating.  Burial with military honors will be in the Bingham Cemetery.  Visitation will be at the Bates-Gould Funeral Home on Friday from 10:00 a.m. to 7:00 p.m. with the family being present from 4p.m. to 6 p.m.

Memorials can be made to the Bingham Lutheran Church.