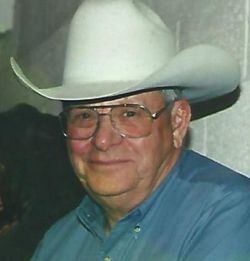 As a young boy, Jack attended various grade schools in the Rushville and Hyannis areas. His mom and stepdad, Weldon “Tiny” Crumroy, worked at the Modisett and later north of Rushville. Upon Tiny’s death, the family moved back to the Hyannis area to be with relatives. Jack worked many odd jobs while he was growing up. He attended high school at Hyannis, graduating in 1954. He was a member on the State qualifying basketball team, 1952-53, as well as the first Hyannis football team, 1953-54.

Jack worked 25 years for Lowe Cattle Co., until headin’ out on his own in 1982. He ranched on the Old Scott Place and the Copsey-Brittan, both south of Bingham. Upon retirement, Jack and Kay bought his present home in Hyannis.

Jack was a hard worker. He also enjoyed working with teams of horses, spending time with his girls and grandkids, basketball, team roping, hunting, fishing and “winning” at cards.

Jack was preceded in death by his wife of 48 years, Kay Zickefoose; Billy Dean Zickefoose, Jack’s full brother who died at the age of 15 months; his parents; father and mother-in-law, Glen and Ioma Powles, his sister, Judy Crumroy Powles, and his brother, VR Zickefoose.

Online condolences may be left at www.batesgould.com. Bates-Gould Funeral Home of Alliance, Neb. is in charge of arrangements.

More in this category: « Betty Scherbarth Lyla May (Olson) Smith »