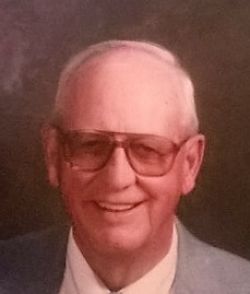 Duane M. Sandberg (Chris) passed away Aug. 12, 2016, after a long and fulfilling life in northwest Nebraska. He was born on Christmas Day, 1923 in Banner County, one of seven children of Morris and Myrtle Sandberg. He graduated from high school there and was a veteran of the United States Army, having served during World War II. He started his farming career near Gering, Neb., sharing a tractor with his brother Larry.

He married Verla Davis on May 15, 1949, in Morrill, Neb., and they moved to the Mirage Flats farm where they lived for almost 40 years. They were the parents of six children: Susan (Tom) Chamberlin, Steve (Marcia), Judy, Cindy (Mick) Turco, Bob, and Verla (John) Bayard. They taught their children to value hard work, community involvement, and especially education. Having gone to college without receiving a degree, he ensured that all of his children graduated.

They moved to Hay Springs in 1968, making their home there until moving to Prairie Pines in 2012. In addition to being a member of the American Legion, Chris was a 50-year Master Mason and a member of Hay Springs Methodist Church. He served on the Mirage Flats District 30 School Board and as a Sheridan County Commissioner.

Throughout the years, he enjoyed traveling with Verla, visiting their children, grandkids and extended family across the country. They also made a trip to Sweden from which the Sandberg family immigrated, to visit extended family there. They spent several summers fishing in Klawock, Ala., inviting many friends and family members to what they talked about as heaven on earth, second in beauty only to Hay Springs, Neb.

Chris loved Verla’s cooking, boating and fishing, reading, farming and spoiling his grandkids. He was always game to play cards and later on, enjoyed early morning coffee conversation at the Senior Center.

Judy, daughter, preceded him in death in 1972 and Verla, wife, in 2013. He is survived by five children, 13 grandchildren, eight great-grandchildren, brother Roy (Donna) Sandberg, sister Myrtie Hughbanks and many friends and extended family members.

In lieu of flowers, and because of the value Chris placed on education, the family requests that memorial contributions be made to the Sandberg Memorial Scholarship Fund at Hay Springs Community Foundation. Donations may be sent to Chamberlain Drabbels Mortuary, PO Box 443, Hay Springs, NE 69337