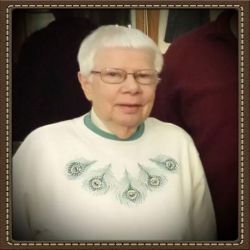 She was born Oct. 17, 1930, in Canal Winchester, Ohio, to Lester V. and Alice Burke. Upon the death of her mother, she was raised by her grandparents Clinton V. and Mary Etta Burke along with help from her aunt Marjorie Alspach and foster parents George and Louise Wolfram. She married William C. McKinley on Nov. 19, 1955, at Lockbourne Air Force Base in Columbus, Ohio. He preceded her in death on June 14, 1994. To this union, one son, William E. McKinley was born on Oct. 13, 1956. He preceded her in death on Feb. 2, 2012.

Marge was employed as a secretary by the Cedar Falls Community Schools until her retirement in 1992 from North Cedar Elementary School. She continued to volunteer her time at North Cedar Elementary for 19 years. She was a member of the United Church of Christ in Cedar Falls where she was active in morning circle and the United Fellowship. Marge was a very loyal Cedar Falls Tigers fan along with the University of Northern Iowa Panthers. Marge will always be remembered for being one of the biggest fans of the Ohio State University Buckeyes as well.

Funeral services were held Wednesday, Aug., 24, 2016, at 10:30 a.m. at the United Church of Christ. Burial took place at Fairview Cemetery, both in Cedar Falls, Iowa.  Dahl-Van Hove-Schoof Funeral Home was in charge of funeral arrangements for Marge McKinley.