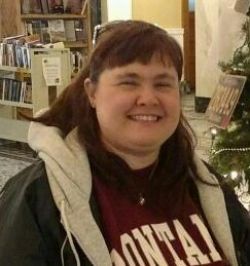 Steph started school close to her ranch home at Pioneer School south of Gordon.  She later attended Rushville Public Schools and graduated in 1992.  She earned a Bachelor’s Degree from Chadron State College in 1997.  It was while she was in college that she met the love of her life, Matthew Alan Stetson, and continued to adore him until the day of her passing.

Steph and Matt were married on July 1, 1995, and then the adventure began!  They moved to Madrid, Neb. for Matt’s first year of teaching.  After Madrid, they lived in Onawa, Iowa, O’Neill, Neb., Harrison, Neb., and finally Gordon.  Each place she moved with her husband, she made a home, and happily joined the community forming relationships with co-workers, neighbors, and students.  She always had a smile on her face wherever she lived.

Steph was a Legion Auxiliary member, a member of the Delta Kappa Gamma Sorority, and a member of the Civil War Trust.  She attended the Berean Church of Gordon and enjoyed any and all school activities.  She loved to watch her nephews and niece and all the students that she was so close to over the years.  She was fond of spending time with her friends, affectionately known as “The Posse” Lisa, Marla, Sharon, and Lynn.  Steph loved to travel!  Her most memorable times were spent with Matt driving across the nation seeing all they wanted to see.  She also enjoyed a good round of golf with her husband and absolutely adored her kitties.  She finally had a dream come true when she became the proud owner of a red Ford Mustang!

Steph worked many jobs during her life.  She was employed with the Gordon-Rushville Public Schools as a District Data Steward/Library Para at the time of her death.  She truly enjoyed her job and really enjoyed interacting with the students who came into the library.

Steph is best remembered for her kind heart, beautiful smile, great laugh, and a gentle nature.  She cared about people and always listened to what they had to say and to any problems they were having.

She was preceded in death by her grandparents Benjamin and Blanche Knight and William and Dorothy Wegner.

A memorial has been established for the Gordon Movie Theater.  Steph loved a good movie and would like others to enjoy the movies as well.  Memorials or flowers may be sent in care of Chamberlain-Pier Funeral Home, PO Box 366, Gordon, Nebraska 69343.

Visitation will be on Monday, Jan. 16, 2017, from 6 to 8 p.m. at the Chamberlain-Pier Mortuary in Gordon.  Services will be held on Tuesday, January 17 at 2 p.m. at the Gordon City Auditorium with Pastor Jason Gantz officiating.  A private family burial will be held in the Gordon Cemetery.