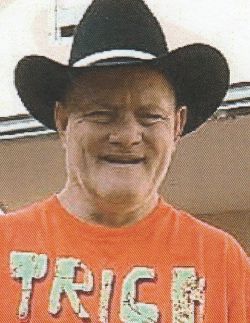 Marty Jay Sanders of Chadron died Monday, Jan. 9, 2017, at Chadron Community Hospital.  Funeral services will be Wednesday, January 18 at 1:30 p.m. at Chamberlain Chapel with Pastor Aaron officiating.  Burial will be at Greenwood Cemetery in Chadron.

Marty was a hard worker and has had various jobs in the Chadron Community.  He made a lasting impression on his co-workers.  His main employers included: CSC Creative Dining and Armstrong Gym, Chadron State Park, mowing at Chamberlain Chapel and laundry at Best Western.

Marty had a fun and rewarding life.  He took many vacations including Rockies games, tubing on the Niobrara River, camping and hiking at Chadron State Park, Scottsbluff Zoo, Cook Shack and other adventures too numerous to name.

Marty looked forward to his birthday and all holidays.  Marty and his friends celebrated his birthday for months before the day.  Marty looked forward to playing Santa Claus at the annual Christmas party.  It was a huge secret that everyone knew.  He would practice his “Ho Ho Ho” several times a day.  No one could ever take a drive with Marty without him waving at every vehicle he passed and playing the never ending game of slug bug.

Marty was survived by many friends, if you were one of them you know who you are.  Marty will be in our hearts forever.

A memorial has been established and donations may be sent in care of Chamberlain Chapel Funeral home in Chadron, NE 69337.

Chamberlain Chapel is in charge of arrangements.