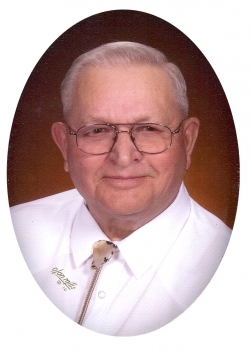 Gene (Pete) (Uncle Pete) was born July 6, 1930, in Gordon, Neb., to Albert and Opal (Forster) Hupp and passed away Jan. 20, 2017, at the Gordon Memorial Hospital.  Gene attended Hay Creek country school in Cherry County by walking or riding horseback each day.  He graduated from Gordon High School in 1948.  He held several jobs while attending school working on farms and at the Gordon Bakery since he and his brothers lived in the basement while in high school.

After high school, he worked on the Warren and Mildred McCray ranch until he was called to the Army for the Korean War in February 1952.  He served as a Corporal carrying a Browning Automatic Rifle (BAR) in a forward unit with the 5th Regimental Combat Team seeing considerable action.  He carried shrapnel in his lower back the rest of his life.  He received the Korean Service Medal with 3 Bronze Service Stars, United Nations Service Medal, National Defense Service Medal, Good Conduct Medal, and the Combat Infantry Badge.  He was discharged on Nov. 25, 1953.

Gene married Nadine (Dean) Estelle McCray on June 15, 1955, at the Chadron Court House.  On April 17, 1959, they welcomed Debra Jean to their family and son, Billy Dean, was born on Feb. 9, 1962.  They enjoyed ranching (and eventually a little farming) and raising registered and commercial Angus cattle.  They were often a stop for regional Angus cattle tours.  Gene also loved hunting, fishing, camping, boating, and his black labs.  He was a 50+ year member of the Gordon American Legion, a life member of the National Rifle Association, and a former member of the American Angus Association.  He also worked part time many years for the Gordon Livestock Auction Company.

Debra and her husband, Bryan Hugen, presented Gene and Nadine their only grandchild, Jeffrey Bryan, on Nov. 9, 1990.  Due to complications from a lingering infection, Nadine died on July 21, 1994.  On Feb. 4, 2000, Gene married Onda Burrows West.  They have since resided west of Gordon enjoying their retirement.

Gene is survived by his wife, Onda of Gordon, Neb.; son, Billy of Sacramento, Calif.; brother, Harold of Clinton, Neb.; brother, Orville (Doc) and his wife, Ellen of Wheatland, Wyo.; son-in-law, Bryan Hugen of Gordon; grandson, Jeffrey (Hillari) Hugen and two great-grandchildren, Benjamin and Lexi all of Gordon; and many nephews, nieces, and stepchildren.

He was preceded in death by his parents; wife, Nadine; daughter, Debra Hugen; brother, Vern; and sister-in-laws, Mary Hupp and Betty Hupp.

Funeral Services will be held Thursday, Jan. 26, 2017, 10 a.m., at Grace Lutheran Church, Gordon, Neb. Burial with Military Honors will be held in the Gordon Cemetery.

A memorial has been established for the Gordon American Legion Post #34 and donations may be sent in care of Chamberlain-Pier Funeral Home, PO Box 366 Gordon, NE 69343.