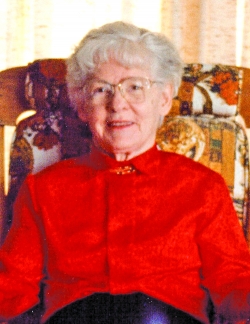 Thelma Alta Dille was born, the first of five children, to Roy C. and Nellie (Gourley) Dille on Dec. 4, 1915, at the home of Nellie’s Grandparents, J.W. and Amy Ostrander in Rushville, Neb. At a very tender age of a few weeks and in very cold weather, her parents took her home, with a team and wagon, to the Gourley ranch in Cedar Valley. Sixty miles southeast of Rushville in Cherry County. She died at her rural sandhills home near Gordon on Feb. 7, 2017.

In 1917, the family, with new baby, Irene, moved to their own ranch southeast of the Gourley ranch. She and her siblings attended school, horseback, of course, in the Turpin Valley. She attended high school in Rushville, graduating in 1933.

On Feb. 10, 1934, she married Norman Bixby Merrill and they both worked on the Spade Ranch. Alta was the cook and honed her lifelong passion for cookery.

In March 1938, she and Norm moved to Colorado Springs, where Norm got his training as a machinist, and where she bore three children. Then in 1943, the whole family moved to San Diego, where Norm worked at Rohr Aircraft through the war years. In 1945, they moved to Alliance where Norm worked as a machinist for Burlington Railroad. In the spring of 1946, they returned to the sandhills to ranch, an occupation they continued for the rest of their lives, and this is where the last of their four children was born.

Besides working cattle and horses on the ranch, Alta was a consummate homemaker, gardener, cook, and seamstress. She taught several of the neighborhood girls how to sew for 4-H, and after an illness at 100 years old, she was giving her caretaker tips on how to cook. Alta was also a member of the Sandhill Chapter of the DAR for many years.

Alta accepted Christ as her personal Savior in the early ’40’s and was a member of Pleasant Point Church. Many family members can point to her example and prayers as sending them on the right road to Jesus Christ.

She was preceded in death by her husband Norman, sisters Irene Westover, Elsie Keller, and brother Art Dille; one daughter-in-law, Vici; one grandson, Bob Telfer; two great-grandsons, and one great-granddaughter.

A memorial has been established for Pleasant Point Church or the Hyannis Cemetery and donations may be sent in care of Chamberlain-Pier Funeral Home, PO Box 366 Gordon, NE 69343.