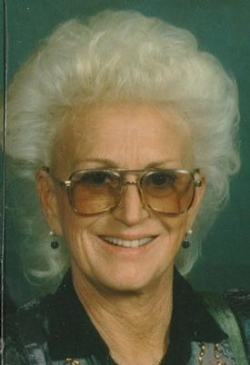 Online condolences for Bernice Leach can be made at www.chamberlainchapel.com.

Bernice was married to David LaBelle in 1948 and had three children: Evelyn Roosa and Nancy Watkins of Florida and David LaBelle Jr. of Wisconsin. In 1959, she married William Leach of Gordon, Neb., and had two girls, Peggy Holsinger and Melissa Junge of Arizona.

This began an adventure in the U.S. Air Force. She traveled to Spain, the Philippines, and Air Force Bases in Texas, Washington D.C., Mississippi, and Colorado, before settling in Chadron, Neb. She had a home with beautiful souvenirs from all of her travels.

She is preceded in death by husband William Leach (Cork), brothers Darrell and Otho Rounds Jr., and sister June Chryst. She is survived by her five children, 14 grandchildren, and 20 great-grandchildren.

Bernice encouraged her children to pursue education and she herself had two years of college education. She taught herself how to reupholster furniture, as well as sewing and crocheting.

She was a spit-fire on the dance floor, dancing to polka and country music, never missing a beat! She had fun playing Keno and driving her Cadillac.

Her family says, “We will miss the fun loving mom and grandmother that we had for too short a time.”

Chamberlain Chapel is in charge of arrangements for Bernice Leach.