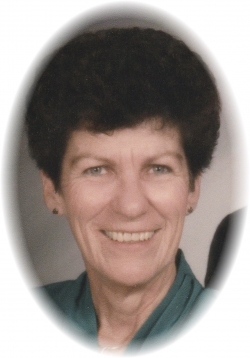 Eva Joan “Jumpin” Heiting passed away on Tuesday, March 7th in her home. Joan was born on Dec. 19, 1934, in a car on the way to the hospital in Alliance, Neb. It was a cold December day and her dad was out looking for a bull, consequently, putting a halt on getting to the hospital. She wasn’t sure if he ever found the bull, but as she said “it was too long for me to wait!”

As a child, Joan lived about 3 miles north of Ellsworth, Neb., in a two or three room house. There wasn’t any water or electricity or a bathroom. A few years later, her parents bought the Skudas place, which was about 25 miles south and east of Hay Springs, Neb., on the Sandhills.  Her new house was much larger and they had a bathroom, electricity and water in the house, which was quite an improvement.

Joan generally rode a horse to school, and more often than not, got bucked off! After 8th grade, she went to Hay Springs High School and she was so excited. She enjoyed high school, got along with all of her teachers, and had a great four years. After graduating from high school, Joan attended what is now Chadron State College. She received a 2 year teaching certificate and taught a few years before marrying the love of her life, Bubs Heiting.

Bubs and Joan were married at the Lutheran Church on the Mirage Flats on June 1, 1954. Since Bubs was in the Navy when they got married, the first two years of their marriage were spent in Alameda, Calif., where Bubs was stationed. Joan really enjoyed California, particularly the warm weather! She met a lot of people and had a lot of fun. They went bowling, dancing and played lots of penny ante poker.

In the spring of 1956, Bubs and Joan moved to the house that she called home for over 60 years. Joan loved her family, her home, her garden, and her beautiful yard. Life wasn’t ever about Joan, it was always about her family, her home and making certain her children were well taken care of. Church was important to her, she made certain all of her children were baptized and confirmed. After church, her family often spent the day with the Rutten family. One Sunday, it was a blizzardy day and Dorothy Rutten (who taught Sunday school) took all of the kids to their house and Bubs and Joan were snowed in! Dorothy had about 4 “extra” kids for a few days and Bubs and Joan painted their kitchen!

Preceding her in death are her parents, her loving husband Bubs, her sons Steve, Tim and Mike, brothers-in-law Don Heiting, Ralph Strotheide, and Ken DeVeny.

A memorial has been established for Hay Springs Community Hall Improvements.  Donations may be sent to Chamberlain Chapel, PO Box 970, Chadron, NE  69337.