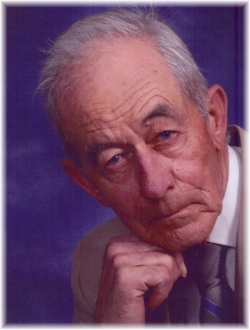 He attended the public schools of Sheridan County, Nebraska, where he was a lifelong resident. After high school, he worked on the family farm until he joined the Marine Corps where he served from 1951 to 1953 in a Military Police unit at Camp Pendleton, Calif.

He worked on the family farm after his military service ended, then worked at the Ford Mercury Dealership as a mechanic and was later employed at Modern Farm Equipment. In 1967, he purchased a seed business, which became Petersen Seeds.

He was a pilot who greatly enjoyed flying; in his early years, he was often called upon to fly patients as a medical ambulance pilot. He was an avid gun collector and camera buff and liked classic cars and motorcycles.

In 2004, he and his wife purchased the Woods family farm north of Rushville, Neb. He enjoyed farming and working with up-to-date equipment in his “retirement”.

Freeman was a permanent member of the Gordon American Legion Post #34 for 62 years. He held the office of Post Commander three times, and served in many local, district and state positions for the Legion. He served on the State Department Children/Youth Committee for over 18 years. He also served on the National Americanism Committee for 10 years, and won a national award for Post #34 for a program he gave to the Gordon grade school. He served on the Post Color Guard, firing squad, and attended numerous functions, promoting programs of the organization. He was instrumental in bringing the Cobra helicopter displayed on Post property.

He was very community oriented and helped the city on many different projects. He also served on several boards in the community. Freeman believed in giving blood regularly and gave over 18 gallons of blood during his lifetime.

He was preceded in death by both parents, his sister Carol Strasburger and grandchild Thomas Neeley.

Funeral services will be held at Chamberlain-Pier Chapel on Friday, March 10, 2017, at 10 a.m. Burial with Military Honors was held at Fairview Cemetery, Rushville, Neb.

A memorial has been established for the Gordon American Legion Scholarship Fund and donations may be sent in care of Chamberlain-Pier Funeral Home, PO Box 366 Gordon, NE 69343.