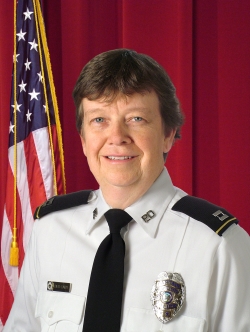 Deb was born on Dec. 14, 1962, in Gordon, Neb., to Gloria Weber and Dale Cady, Sandhills ranchers.  The ranching lifestyle was a perpetual influence on Deb; it instilled in her a love of nature that extended to all living things.  This respect informed her actions in all aspects of her life.  She was always a steward of the ranch and returned there frequently.

She went to country school and graduated from Gordon High School in 1981.  Following in the footsteps of her grandfather, Clyde Weber, she pursued a career in law enforcement. In 1986, she graduated with honors from the University of Nebraska-Lincoln with a BS in Criminal Justice.

Cpt. Deb Cady’s career started immediately with the Rapid City Police Department in July 1986.  In April 2012, after 26 years, she retired from the RCPD as the highest ranking female officer.  In her career, she worked in the Patrol Division, the Narcotics Division and Criminal investigation Division.  Without intent, she was a trailblazer for women in the RCPD.  Throughout her career, she was fair, respected and professional.  She would say she was just doing her job.

Deb treasured time with friends and family; and enjoyed traveling, riding motorcycles, horseback riding, her dogs, and camping.  She was passionate about cancer research, advocating for clinical trials, and supporting those with breast cancer.

Deb impacted so many lives in both big and little ways; many of which she may not have known.  She was a role model, a teacher, and a mentor to all.  She accepted everyone for who they were and was always ready with a smile.  Deb was kind, generous, and compassionate.  She influenced the community in broad ways, and one person at a time.  She was humble and a little embarrassed when her impact was acknowledged.  She contributed to our life by just living her life true to herself.

She is preceded in death by her mother and father.