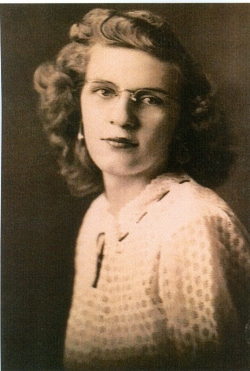 Barbara Lou Gale, departed this life and entered into the presence of Jesus on March 11, 2017.

Barbara was born to Jake and Edith (Mitchell) Kime in Cornish, Colo. on May 17, 1927.  The Kimes bought a ranch North of Whitman in the Sandhills of Nebraska when Barb was two years old.  Barb grew up there, playing and doing chores with her three siblings.  Her mother gave her two precious gifts, her faith and a love for music.  Barb rode her horse to a one-room country school until they moved further Northeast to the present day Kime Ranch South of Nenzel, then known as the HL Bar.

Barb took correspondence courses for her first two years of high school, attended UNSA at Curtis the next year, and graduated from Valentine High School in 1944.  After a year of Business College in Greeley, Colo., she attended summer school at Chadron State Teachers College and received a teaching permit.  She taught at the Lord School, once again riding her horse to school.  She also taught at Cutcomb Lake School for a time after her marriage to Edson Gale, Jr. on Jan. 1, 1947.

Edson and Barbara made their home on the Gale Ranch south of Cody and had three children.  Garrett Lee was born in 1957 and Janet Kay in 1961.  Judy Ann was born premature on Dec. 20, 1966, and passed away the next day.

Barbara was a ranch wife courageously supporting her husband and loving her children with hardworking hands.  Barb’s years on the ranch consisted of cooking for hay crews, doing their laundry, cleaning the bunkhouse, gardening and canning, checking summer pasture, filling in on a mower when help was hard to find, caring for her family and keeping the ranch books.  After her children were grown, she became a freelance writer for the North Platte Telegraph and the Fence Post.  She was a member of the Nebraska Presswomen. Her intelligence, curiosity, love for storytelling and history helped her win awards for her writing and photography.  She was also a 40 year 4-H leader and served on the Cherry County Extension Board, Historical Society Board and the 4-H Council.  She also enjoyed teaching piano and sewing lessons to her children, grandchildren and community children.

She helped with Sunday School and Christmas programs at Holy Cross Church and attended Sandhills Church of Hope in later years.  Her quiet faith was shown by the high morals she lived by and the way she loved and gave herself to her husband, children, grandchildren and those around her.  Her dry wit and soft cheek will be greatly missed.

She was lovingly cared for in her final years at Gordon Country Side Care, Cherry Hills Estates and Pioneer Memorial Rest Home in Mullen, Neb., where she filled her time with solitaire, crosswords and bingo.  She passed away at Cherry County Hospital in Valentine at the age of 89.

Preceding her in death were her husband, parents, two siblings, Leonard Kime and Beth Yeager, and her infant daughter Judy.

Barb is survived by her son Garrett and friend Tammy of Valentine, daughter Janet and husband Rob Parkhurst of Cody, grandchildren, Cody (Molly) Gale of Hobson, Mont., Chris(Brenda) Gale of Neligh, Neb., Chad and friend Jessica of Valentine, Mandy (Steve) Wetz of Rapid City, S.D., Nicole (Paul) Hotz of Cody, Zane (Anna) Parkhurst of Lincoln and twelve great-grandchildren.  She is also survived by her brother, Kenneth (Buzz) Kime of Valentine and a host of relatives and friends.

Services were held March 14, 2017, at the Presbyterian Church in Valentine with internment at Prairie Lawn Cemetery in Cody, Neb.  Arrangements were made by Sandoz Chapel of the Pines.