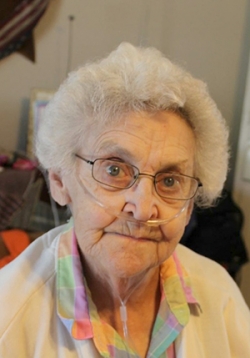 Frances E. Stillwell was born July 3, 1929, north of Valentine, Nebraska, the daughter of Hilaire and Martha (Malone) Nollette. When it was time for her to go to high school, she took the train from Valentine to O’Neill to attend school, returning home only for holidays and summers. She graduated from St. Mary’s Academy in 1947.

On September 4, 1948, Frances was united in marriage to Donald E. Stillwell. Frances and Don lived in Valentine and raised their family.

While raising their six children: Sherry, Bob, Doris, Jean, Jane, and Joan, Frances worked for Flynn’s Drug Store and Pharmacy. Later she was employed at the office of the Natural Resources District in Valentine until her retirement.

Frances was a woman of faith, a creative and generous woman with a sharp sense of humor. She loved to cook and was famous for a number of special dishes prepared for family dinners. She knitted thousands of miles of yarn into sweater jackets (the kind with collar, zipper, and wildlife picture on the back), baby booties, and dishcloths. In her later years, she made hundreds of colorful dishcloths and potholders to be sold in her daughter’s beauty shop, in spite of her arthritis.

She baked and decorated wedding cakes for her children and family friends; provided delicious food for church events, and made countless wild game entrees from the wildlife that her husband brought home. She was a skilled fisherman herself, but most of the time she was careful not to outfish her husband. The Stillwelll children can share a number of stories about family fishing trips, camping, and card games.

Frances cultivated many friendships - from work, church, and chance meetings. She prayed for them, supported them, and helped when they were in need. She wrote countless letters and cards to friends and relatives. She was involved in her children’s lives, attending boxing matches and baseball games; later, as her children and grandchildren grew and scattered, she was able to stay in touch through social media. She loved, and was loved by all who knew her, and she will be greatly missed.

A Rosary memorial service will be held in Valentine, Neb. at St. Nicholas Church Friday, March 17 at 10:00 a.m. Burial following at Mt. Hope Cemetery in Valentine.

Memorials may be given to the charity of your choice or to the family for designation.