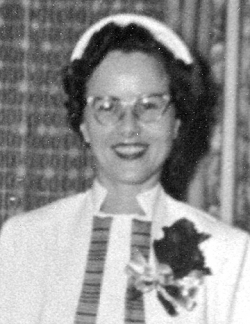 Jean Evaline (Johnson) Norman, the second of five children born to Cornelius (Neil) and Jean (Murray) Johnson on March 27, 1917, in Medicine Hat, Alberta, Canada, passed on March 14, 2017.  She and her eldest brother, Murray, began their schooling at a rural school in Alberta until the 5th grade.  Her brother was her main competition all the way through school.  At the age of nine, she and her family moved to the family farm at Rushville, Neb., where her dad had grown up and raised percheron horses, which is where Evaline developed her passion for horses.  The family came by car with Grandpa Johnson, their mother, and the five children.  Their father came about a month later by train bringing livestock, machinery, and the family dog.  Once the family moved to Rushville, Evaline was baptized and joined the family Presbyterian Church of Rushville.

In high school, Evaline took a two year teacher’s training course.  At that time, those who took the course and passed the state teachers’ exams could teach right out of high school.  She also attended Chadron State College and planned to become a teacher, but when the time came to issue her teaching certificate, it was denied because she was born in Canada and had not obtained her final citizenship papers.  Since she could not teach, she went to work for Northwestern Bell Telephone Company at Rushville, remained there for five years, and was transferred to Crawford in 1943.  She worked a total of 18 years for the company, became Chief Telephone Operator at Gordon briefly, and finished her last five years working for the company in Crawford as the Chief Operator.  She also worked switchboards at Fort Robinson on occasion during WWII while POWs were stationed at the fort.

While working at Crawford, Evaline met Bernard Norman, and they were married July 14, 1954.  They first lived in Crawford because Evaline continued to work at the telephone office, then lived in the Thompson residence at Whitney for a short period, and finally moved to the ranch north of Crawford in spring of 1956.  Three children were born to this union - Gary Lee (April 1, 1956), Ben Cornelius (Dec. 12, 1958), and Marilyn Jean (April 8, 1961).  Gary had a birth injury and was not well all of his life.  He was taken to Denver for treatment in his early life and finally to the Mayo Clinic in Rochester, Minn.  However, Gary passed on Nov. 26, 1969, at the age of 13.

After Gary’s passing, the family spent two horse-racing seasons at the thoroughbred tracks in Nebraska from 1970 to 1971.  However, the family continued to race horses for several years.  Evaline and Bernard decided not to raise their children at the race track as it involved too much moving and changing of schools.  Fortunately, there was a grade school near the ranch.  However, high school would be an issue due to the 16 miles from the ranch to Crawford and the rules about tuition.  Because of this, a home in Crawford was purchased and remodeled in the fall of 1975 when Ben was a senior and Jean was a freshman.  The family continued to use both homes until Ben’s marriage in 1981, when the final move, for Bernard and Evaline, was made to town.  Bernard did not really retire however.  When not racing, he spent his time helping the family at their two places and watching the grandchildren.

Evaline, Bernard, and their family enjoyed various successes with their horse-racing business.  The entire family stayed active with each of them taking a part in the business. When given any opportunity, the several racing win pictures were shared with guests of Evaline and Bernard. Two horses sold to Charles and Cecil Smith, two prominent polo players, and Charles was a World Champion Goaler. These two horses were named Izzy’s Princess and Nebraska Sunset.  Izzy’s Princess sold to Hugo Delmar, who won several best playing pony awards in specific tournaments in the 1960s.  Nebraska Sunset is one of only 33 horses that was included in the history of the Polo Hall of Fame. She also won the Best Playing Pony award in the US Open - the premier polo tournament of the year.  Evaline and Bernard’s son Ben broke Nebraska Sunset and after deciding not to race the mare, their daughter Jean trained her for two years in preparation for selling her to play polo.

Besides time spent at the track and trips - in connection with the horse-racing business - Bernard and Evaline took many other trips together, which they both enjoyed.  They preferred driving so they could see the country together.  They did, however, fly to Las Vegas with family in 1993.  Bernard always said that things, like traveling, should be done while people were able to enjoy and do them.  According to Evaline, she later understood this.  As Evaline wrote this obituary she said, “Now, I know (why he wanted to take trips while we were able) because he suddenly left us on Oct. 14, 1995.  Family helps fill such a void – don’t know what I’d do without them, but there are those moments and no one can take Bernard’s place.”

Evaline was predeceased by Bernard, her loving husband; her sons, Gary and Ben; her parents, Jean and Cornelius; her four siblings and their spouses, Murray and Beth, Bennett and Ruth, Mary and Dale, and Stuart and Wilma.

Survivors include: Diane, Ben’s wife and their sons, Shane, Clint, Brett, and Luke and his wife Erin with their four children Ada, Ben, Claire, and Dale Axel; Daughter Jean and her husband Rick and her three children Cameron and wife Shelby, Clayton, and Candace along with numerous nieces and nephews, many other relatives, and friends.

Evaline’s noticeable accomplishments include: 50 year membership and Post Matron of Eastern Star, Eastern Star Kensington, H.O.A. Club until their closure (however, this sect merged with the Gordon area and Evaline was a member until her death), and she was a Member of Nebraska Cattlewomen.

Memorials have been established for the Crawford Volunteer Fire Department or the Crawford United Methodist Church.  Donations may be sent to Chamberlain Chapel. PO Box 970, Chadron, NE  69337