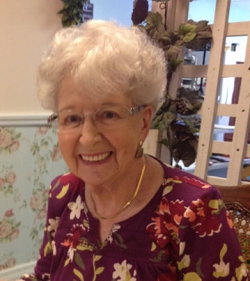 Alice Lilian Valaika, 93, of Bradenton, Florida, passed away on March 15, 2017. Alice was a resident of Gordon, Nebraska until September 2014 when Alice moved to Bradenton, Fla. where she resided at Waters Edge Retirement Community.

Alice was born on February 24, 1924, in Stepney, London, England to Henry (Harry) and Catherine Jarman. She met Raymond Edward Valaika, who was serving in the U.S. Army-Air Corps during World War II and was on leave in London. They met at the Royal Opera House ballroom in Covent Garden, London, England where they both enjoyed dancing. During one of their many evenings dancing, Ray proposed to Alice in one of the royal boxes in the Opera House looking down on the ballroom. On August 11, 1945, Alice and Ray were married at St. Mary’s Catholic Church in Crayford, Kent, England. They lived their first three years in Plymouth, Pa., Ray’s home town, and then traveled by train with their son John to Gordon, Nebraska, a move which turned into many more happy years. They arrived the night before the 1949 blizzard. Four more children were born while they lived in Gordon: Kevin, Michael, Catherine and Mary. Eventually Alice and Ray also celebrated the births of seven grandchildren. Her husband Ray passed away on September 12, 2003. In the following 14 years Alice was also blessed with seven great grandchildren.

While Ray was a craftsman and interior decorator and later an employee of the U.S. Postal Service for 33 years, Alice went from doing bookkeeping and office work in London to being a full-time mother in America plus had a dress making business at home and sewed many beautiful wedding dresses. In 1971, Alice joined the school system in Gordon where she worked for 23 years until the age of 69, spending most of those years as the office manager and assistant to the superintendent of schools.

Alice and Ray loved their community. They were both very active at St. Leo’s Catholic Church in Gordon, and they were instrumental in the founding of the Gordon Senior Community Center. Alice appreciated music and was an active member of the Gordon Music and Dramatics Club. Alice’s children recall many visits to the Black Hills, where the family enjoyed camping and fishing. At different times, Alice and Ray traveled to many parts of the U.S., as well as to Canada, England, and Germany. Alice herself enjoyed 65 years living in Gordon, before departing on September 12, 2014, to live in Florida near her daughter, Catherine. She celebrated her 93rd birthday on February 24, 2017.