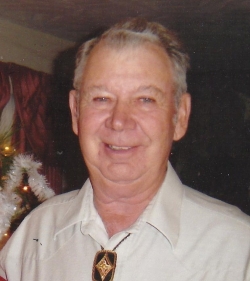 Bill Bruns, 83, was born on May 8, 1933, and passed into eternal rest on March 18, 2017.  Bill was born to Ludwig Lubben and Perna Zoe (Widman) Bruns in Gordon, Neb.; he was the youngest in the family of six.   His siblings; LeRoy (Helen), Pearle (Ken) Child, Glenn (Gwendolen), Alice Marie (Ted) Wellnitz and Kenneth (Sue) preceded him in death.

Before WWII, Bill lived with his parents in Gordon and attended primary school through the third grade.  When WWII began, his older brothers were drafted and the family moved back to Pine Springs Ranch east of Whiteclay.  Bill then attended country school located on the Bruns’ ranch; he walked to school with Alice Marie who was his teacher.  Although Bill would have preferred to ride his horse, he had to walk with his sister.  The next year he went to school at Extension and continued there until the 7th grade when his family moved back to Gordon.  He graduated from high school in 1951 with his original class.

Bill was drafted into the US Army during the Korean War, he spent time in Ft. Carson, Colo., and Ft. Campbell, Kent., from 1952-1955.  He made good friends who he kept in touch with his whole life.  After his discharge, he returned to take over the Ranch.  Bill loved the ranch, which was homesteaded by his father and uncles; he was the third generation Bruns to live and work the land.  He loved the land and his life as a rancher. He raised several breeds of cattle starting with Hereford, which his father had raised.  Through the years they raised Limousin, Gelbvieh and Angus cattle.  Rounding up the cattle was a family event that started with saddling the horses.  One of his favorites was a black horse he named “Spark Plug”.

Bill was introduced to Deanna Johnson by her brother Deen after church one Sunday.  They married on Dec. 8, 1956, and began their life of over 60 years together. From their honeymoon trip to Washington State to later camping with the Johnson family in the Black Hills, to their retirement trips traveling coast to coast by car, Bill enjoyed seeing the country and farmland.  Bill enjoyed his grandchildren, he loved to tease and tickle them.  He took them with him to feed the cattle and had them help him on the ranch.

Throughout his life, Bill was a committed volunteer and community servant.  He served on the First Methodist Church Board in Gordon, the Extension Community Church in White Clay, Morse Memorial Methodist Church Board in Rushville, and he served on the Farmer’s Coop Board of Directors.  He was a lifetime member of the American Legion.  He was elected Sheridan County Commissioner for four years and served on the Rural Fire District Board for 39 years.  Throughout his service as commissioner, he loved to drive the county roads inspecting them and enjoying the countryside.  Bill had a strong and quiet faith in God and was a source of strength for his family, living by his word and example.

A memorial has been established and donations may be sent to Morse memorial Methodist Church or Rushville Volunteer Fire Department.