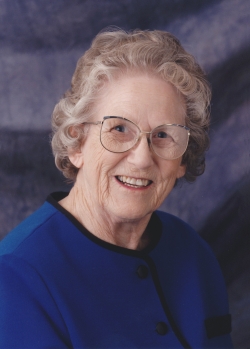 Nearly 100 years ago, born to one of the early pioneer families of Sheridan County, Neb., Hope Lucille Robins arrived June 22, 1917, in a small sod and log house. She was the first child born to Bennett and Frieda (Pfisterer) Robins.  Hope was the eldest of four children and was raised on a cattle ranch north of Rushville, Neb.  Her grandparents, Benjamin and Lila (Abbott) Robins were the first couple to be issued a marriage license in Sheridan County.  On Friday, April 7, 2017, in Bozeman, Mont., Hope joined her departed loved ones.

Hope lived through many changes in her lifetime. She was born without in-door plumbing; a well just outside the kitchen door served up water for cooking. Outside, a gravity fed water tank heated by the sun served as a solar shower in the warm seasons.  Transportation was by horse and wagon and cars began appearing in western Nebraska by the time she was three.

Photography changed from the formal cabinet photos to families owning their own box camera. Hope’s mother took many photos of her daughter, and as soon as Hope was old enough, she continued that tradition, eventually with her own red box camera. As she was growing up, the 8-party telephone line was installed. Then electricity via the Rural Electric Association reached the northern most rural parts of Nebraska, including her parents’ ranch.

At the age of 12, new neighbors, Bert and Cora Tryon, arrived 5 miles to the south at what is now known as the Forney cabin. They had a nine-year-old son, Stanley, who became enamored with Hope as reported by his uncle who was employed on the Robins’ ranch. The feeling was not mutual.

Hope attended a one room school house just over the hill from her parents. She would either ride a horse or walk to school. The teachers were single young women and Hope’s parents provided lodging for some of Hope’s teachers. When she went to Rushville High School, she stayed with her grandparents Benjamin and Lila Robins and they would drive her home on the weekends.

Community dances were the rage. Hope learned how to chord on the organ while her father played violin. Living room furniture would be moved to the outer walls providing room for dancing.  Later on, anyone who had a vehicle would stop along the rugged dirt road and pick up others of similar age, drive to Rushville and dance the evening away. At one such occasion, Hope and Stanley had ridden together to the dance; however, they were not dating at the time. The young men and women were on opposite sides of the dance floor. On more than one occasion, a young man would make eye contact with Hope and indicate he was interested in a dance, but once he walked across the dance floor, the young man chose a different girl. By the third such incident, Hope approached the young man and asks him to explain his actions to which he replied “Well no one is going to ask you to dance with him standing behind you!”  Stanley, was behind Hope, quietly glaring down any potential suitor and shaking his head “No”. When Hope found that out, she grabbed Stanley’s hand and said “Well if you won’t let anyone dance with me, then you are going to dance with me!”

Hope graduated from Rushville High School in 1934 and was living with her parents, helping with the household and her siblings. It was during this time, Hope and Stanley’s attraction grew.

Soon after Stanley graduated from high school, and went to college in Lincoln, Neb., World War II had begun.  He knew he would be called to serve and decided he wanted to be a pilot, but also wanted to know the mechanics of an airplane.  Stanley was offered a job in Columbus, Ohio, building airplanes and after a short visit with his family, on a cold blizzard night in 1942, he drove and dug his way through the snowdrifts to Hope’s house. Upon entering her house, he says to Hope, “Got your bags packed?”  That was the proposal. The next day they took the passenger train from Rushville to Omaha and on Jan. 12, 1942, were married before they boarded a train to Columbus, Ohio.

When Stanley entered the military service, Hope returned to Rushville to her parents’ ranch.  Upon his discharge, they began their life living on the Tryon farm. With the help of her husband and children, the family raised a large fruit and vegetable garden. Hope coordinated “farmer’s market on wheels” with her station wagon delivering produce to families in town.

In addition to farming, Stanley became employed by Farm Bureau and a series of promotions from 1967 through the early 1980s meant several moves. In 1967, Hope and Stanley left Rushville, moving first to Alliance, Neb., then to Lincoln, Neb., Littleton, Colo., and ending in Bozeman, Mont., where they made their final home. Wherever Hope went, she made friends quickly and like her many houseplants and garden flowers, she kept those friendships growing and blooming long after they left the area.

In Bozeman, Mont., Hope volunteered for the Welcome Wagon Committee and was the “caller” for the Salvation Army committee meetings for well over 20 years. Hope took up china painting and won several ribbons at the Bozeman County Fair. She was known in the Bozeman area as the “Cinnamon Roll Lady”. Wherever Stanley and Hope traveled, knitted potholders and/or cinnamon rolls were given to many a friend and relative.

Her talents as a great cook and baker fed many a neighborhood picnic, deer hunter and visitor.

From cooking on wood and kerosene stoves to today’s microwave oven, Hope learned many, many new techniques and inventions. From the old style wall phone with separate mouth piece and receiver to today’s cell phone technology.  From the horse and buggy days to landing on the moon and driverless cars; from the first computer that took up a huge room to the computer pad technology, Hope was privileged to live during a time of rapid changes and many improvements.

She loved music and played both the piano and organ and singing with her children, grandchildren and friends. Hope enjoyed driving.  She drove from Rushville, to Ft. Worth, Texas, with only her infant son to be with Stanley while he was training for the Air Corps. Many kids will recall how she would drive over specific rolling hills north of Rushville so that your tummy would ‘turn’. Several trips were made throughout Nebraska and of course from Montana to Nebraska to visit friends and relatives.

The family wishes to thank the staff, residents and volunteers at the Gallatin Rest Home for making Hope’s final years an enjoyable time.

Memorials or contributions may be made to the charity of your choice in Hope Tryon’s name.

Joint memorial services for Hope and Stanley are provided by Dokken-Nelson Funeral Service and will be held at 11 a.m. on July 3, 2017, at Dokken-Nelson Funeral Home, Bozeman, Mont. Burial is at Sunset Hills Cemetery followed by a picnic in Lindley Park adjacent to the cemetery. Condolences may be left at their website wwww.dokken-nelson.com.