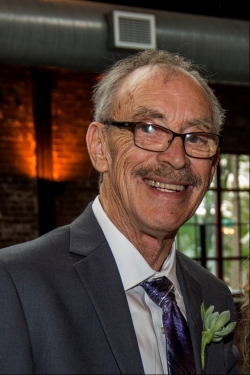 He was baptized into the Christian faith and confirmed at St. Paul’s Lutheran Church in Rushville, Neb.  After graduating from Rushville High School in 1964, Butch attended Chadron State College where he was a proud member of Alpha Phi Omega fraternity graduating in 1968 with a BA Degree in Education.  He taught high school in Bridgeport, Neb., and middle school in Pine Ridge, S.D.  In addition to educating young minds, Butch had a desire to address deeper issues leading him to pursue a graduate degree from the University of South Dakota graduating in 1983 with a Master of Arts in Counseling, Guidance, and Personnel Services.  He spent many years offering his guidance and counseling to those suffering from substance abuse.

In 1985, he married Vicki Brush and they had three children.  At the time of their marriage, Butch was Director of Patient Care and Programs at River Park Drug & Alcohol Abuse Center for St. Mary’s Hospital in Pierre, S.D.  They later moved to Omaha where he was Director of the Inter-Tribal Treatment Center.

Butch was a lifelong fisherman, loved the outdoors and gardening.  He looked for every opportunity to pick up one of his many fishing rods and tackle boxes and head to the lake.

Butch’s prolific reading ability kept his nose stuck in a book from a very young age.  His sister remembers her brother going to the library and lugging home a large gunny sack full of books, which he would avidly consume each week.

For fun, Butch was known to play cards, especially enjoying poker in any form.  Butch loved the TV comedy “Big Bang Theory” and could sit for hours watching reruns that gave him many laughs.  Watching and enthusiastically cheering his kids at sporting events topped his list of fun and games not to mention the sheer joy of visits from his three very active grandchildren.  He would often mention how proud he was of his children and their successes.