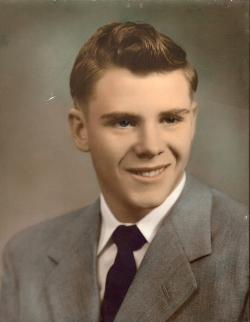 In the early years of his life, Bennie grew up on the ranch with his father and Grandmother Millie Hugen. He attended School District 167 never missing a day of school from the time he started kindergarten until he graduated from eighth grade. This was an accomplishment he was quite proud of. He graduated from Gordon High School in 1954. Throughout high school, he was a member of the FFA club.

At this time, he returned to the ranch and began working with his father raising Black Angus Cattle and continued to do so right up to the time of his passing. Bennie had a great love for his ranch and animals in his care whether it be a herd cow, bucket calf, his dogs or cats; they all had the best that he could provide them. This spring he was overjoyed as he said that he had the best calf crop that he had ever had.

He enjoyed reading and most of all visiting with anyone one who cared to listen. He was a wealth of information of not only what he had seen and done in his lifetime but also the history of the land and people who lived in the area. He was a wonderful storyteller when he shared this stories with friends and family.

Bennie was a member of the Gordon Roping Club in his younger years. He was a member of the Nebraska Angus Association and the Tri-State Cowboy Association for a time. He enjoyed helping his children with their many 4-H Livestock projects and was a leader of the Niobrara 4-H club. He was proud when one of the calves or horses in the early years would earn a purple ribbon or champion placing.

He often said he was a “rich man” because he was blessed with his family and friends. He will be missed greatly by all.

Visitation will be Wednesday, May 31, 2017, at the Chamberlain-Pier Funeral Home, 101 North Main St., Gordon, Neb., beginning at 6 p.m. Funeral services will be Thursday, June 1, 2017, at 10:30 a.m. at the funeral home with Pastor Marsha Stauss officiating and burial to follow at the Gordon Cemetery.

A memorial has been established for the Tri-State Cowboys Museum and donations may be sent in care of Chamberlain-Pier Funeral Home, PO Box 366, Gordon, NE 69343.