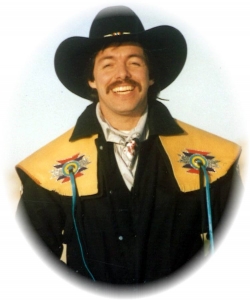 During these early years Stacy started his family with a daughter, Shea Shedeed. Later he divorced and Stacy met a beautiful cowgirl named Debbie Swallow and married her at the Crazy Horse Rodeo in 1992. They celebrated their 25th wedding anniversary May 23rd with many family and friends attending. Debbie and Stacy were blessed with four children, Steven, Carlee, Jimi Dawn, and Natalia. He was a great father figure to his children but also called dad by many including Lyle Tibbits, Todd Janis, Chauncey Jean and Swayzie Clifford, Myron and Tony Johnson to name a few.

Stacy continued to rodeo and had much success in the rodeo world and even announced a few rodeos, which fit his natural gift of gab. He created and produced the first rodeo, style show, and art show at Crazy Horse Monument in 1991 with Kellie Powers and Deb Yellow Rose. Later he was involved with many different rodeos, coaching young cowboys and cowgirls and promoting the sport of rodeo.

Stacy attended the National Business College in Rapid City on a Rodeo Scholarship. He ended up finishing his business degree at Oglala Lakota College where he worked towards his Master’s in Business getting within one credit of finishing before he stopped. Stacy worked at construction for many years before he became manager of the Day’s Inn in Rapid City, SD. He then started managing the Cedar Pass Lodge, in Interior, SD before starting his career at the Oglala Sioux Tribe as the Director of Parks and Recreation, and later as business accountant for 15 years. He enjoyed his job and loved his co-workers as his second family.

Stacy is preceded in death by his father James Harry DeWolfe, maternal and paternal grandparents, Harry and Cora DeWolfe and Alice and Melvin Armstrong, his best friend C.L. Johnson, his brother-in-law Kevin Swallow, and Bud Swallow, yet another young man that they took in as one of their own. Stacy will be forever cherished by his wife Debbie, his daughter, Shea (Shedeed) Vankeuren and her twin daughters, Collette and Vivian from Denver CO. His son Steven, his daughters, Carlee, Jimi Dawn, and Natalia, of Cuny Table, SD. His mother and stepfather, Bob and Donna Shedeed. Sister, Denelle Ashley from Valentine, NE., Brothers, Cory Shedeed of Gretna, NE, and Troy Shedeed and (foster brother) David Dunn of Marietta CA. Sisters, Mitzi DeWolfe from Austin TX, Kyla DeWolfe Johnson from Poplar WI, and brother, Gerald DeWolfe from Austin, TX., Stacy’s beloved aunties, Vera DeWolfe Faulk, Frances Walton, Alice Brewer, and Vesta Strasburger, many cousins, nieces, nephews, and a host of friends. Stacy will be remembered for a host of exceptional accomplishments and personal qualities, but most will remember his amazing smile, his infectious giggle, and his gentle nature. He often provided lots of love, an open door to fill your tummy, “a ring of red and a loaf of bread”, and words of encouragement to anyone in need. He would give the shirt off his back and literally did at several rodeos.

More in this category: « Alice A Harris James Wesley Borman »