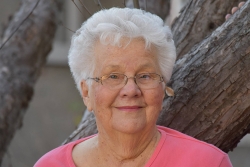 The gates of Heaven opened for Mrs. Lavonne Burrows Monday morning, June 19, 2017, with her family by her side.

On November 17, 1957, she married the love of her life, Bryan Burrows.  To this union five children were born:  Marlys, Carol, Alynn, Della, and Clifford.

The essence of Lavonne’s life was exemplified in her love for her family, her garden, her church, and her service groups.

Lavonne carried on the tradition of her beloved family with a light touch of humor. Many friends and family can recall stories with a smile.

None but those who have sat in the shadow of a great bereavement can justly weigh such a sorrow as this.  This husband and children with a devotion few persons are capable of, their strength given sweetly, tenderly, to this precious mother and whose devotion never faltered could not detain her by the clasp of earthly life; but after the last word has been spoken, the last sign of recognition gone, a look of peace settled on her face which proclaimed victory, and they knew she was resting on a Mighty arm.

A memorial has been established for Immanuel Lutheran Church and donations may be sent in care of Chamberlain-Pier Funeral Home, PO Box 366 Gordon, Neb., 69343.