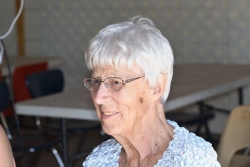 Funeral services for Elsie Rose, 78, will be held at 1 p.m. Friday, July 7, 2017, at the Goshen County Fairgrounds Pavilion with Pastors Scott Mathis and Tom Walker officiating. Burial will follow in the Forest Lawn Cemetery in Morrill, Neb. Elsie died June 26, 2017, at her daughter’s home in Sutherland, Neb. Memorials may be given to either the Goshen County 4-H for the poultry and rabbit barns or the Senior Friendship Center. Visitation will be at the funeral home Thursday, July 6 from 3 p.m. to 5 p.m. and the casket will be open prior to the service. The family requests that you wear Goshen County Fair or western attire. Arrangements are by the Colyer Funeral Home. Condolences may be sent to www.colyerfuneralhome.com.

Elsie was born Jan. 31, 1939, in Torrington, Wyo., the daughter of Carl and Katie (Hill) Hansen. She grew up on the T Kettle Ranch north of Torrington and received her education in Torrington. She married Cecil Rose on Sept. 9, 1955, in Lusk, Wyo. They owned and operated the Empire Ranch north of Henry, Neb., all their lives. They raised and trained Morgan horses and Hereford cattle, later switching to Texas longhorns. After Cecil died in 2009, Elsie remained on the ranch and continued the longhorn breeding program. She also worked at the Torrington Livestock Auction and in later years at Wheelers (Country General), McNamee Auctions, Food Pride, DSI, and was a para at Chalk Butte School. She judged (chickens, rabbits, and other small animals) at county fairs in Nebraska and Wyoming.

Elsie was a 4-H leader for fifty-four years and was named outstanding leader several times. She was affiliated with the Wyoming Morgan Horse Association, Wyoming Texas Longhorn Association, Sheep Creek Women’s Club, and Farm Bureau. She also helped with the senior center garage sales among various other volunteer endeavors.