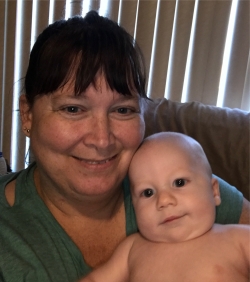 Christina “Tina” Ann Kearns, age 50, of Rushville passed away on Sunday, July 2, 2017, unexpectedly at home. Tina was born May 8, 1967, to James and Phyllis (Grass) Kearns, at the hospital in Rushville.  She graduated high school in Rushville, Neb., and later attended the Oglala Lakota College Nursing Program and became an RN. She then received her Bachelor’s in Nursing from South Dakota State University.

Tina started her nursing career at Gordon Memorial Hospital before finding her passion and true calling working as a Dialysis Nurse for over 20 years. She became one of only four certified Nephrology nurses in the state of Nebraska.

She was preceded in death by grandchildren Rylan, Emersyn, Kaden and Hayden.

A memorial has been established for a college fund for her grandchildren and donations may be sent to Security First Bank, PO Box 340, Hay Springs, NE 69347.

Chamberlain-Pier Funeral Home was in charge of arrangements and online condolences may be left at www.chamberlainchapel.com