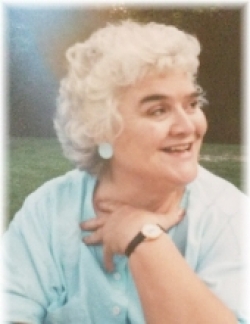 Jo was a graduate of Riverton High School and Chadron State College. On August 13, 1950, she married Richard Dean Matula in Riverton, Wyoming and Dick and Jo would soon settle in Gordon, Nebraska and eventually welcome the birth of their 4 sons: Jerry, Tony, Rick and David.

During her life, Jo held many jobs. She worked as an elementary teacher, drove a bus, delivered bread, sold fireworks, taught in a rural school, worked at the Western Café, served as an Avon sales representative, helped to manage the Gordon Jack and Jill Grocery store, worked as a clerk at Stockmen’s Drug Store besides raising 4 boys.

She enjoyed gardening, baking and as the consummate kid at heart, cruising main street. She loved boating, but was not fond of water. She was the “go to mom” for a number of students at the big yellow house across the street from the high school. Jo was a friend to everyone. And of course, being a mother was her first love.

Jo was active in the choir during high school and college, was also a member of the Glee Club and played in the band at Chadron State. She was a member of a number of Card Clubs, the Legion Auxiliary, DAR, Red Hatters Society and served as a Methodist Church Event organizer. She was also an honorary member of the Sioux Tribe.

Funeral services were held Friday, June 23, 2017, 10:30 a.m. at the United Methodist Church, Gordon, Neb. with burial in the Gordon Cemetery.

The family suggests memorial to the Gordon Meals on Wheels or the Gordon Food Pantry and donations may be sent in care of Chamberlain-Pier Funeral Home, PO Box 366, Gordon, NE 69343.