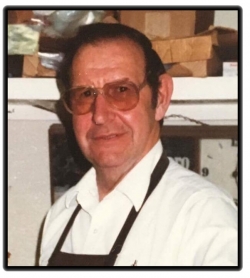 Dick graduated from Gordon High School in 1948. He attended Chadron State College and also Northwest University at Chicago. He played football and basketball during his high school and college days. He was on the only Chadron State College Football team to go to a bowl game, the Bean Bowl. His positions were as punter and defensive tackle.

Dick married Joan Martin on Aug. 13, 1950, in Riverton, Wyo., and they eventually settled in Gordon where his hardest job was probably corralling their four boys. Jo was always there with Dick no matter where their journey took them.

Dick was a member of the Jaycees, President of the Quarter Back Club, Chamber of Commerce and an honorary member of the Sioux Tribe. He loved horses, from breeding and breaking them and just riding. He enjoyed arrowhead hunting, fishing, hunting all over the panhandle, snowmobiling, bowling, golfing and boating became a passion with the “Blue Goose”. He also loved attending rodeos and pow wow activities. He was passionate about his relationship with people.

The family suggests memorials to the Gordon Meals on Wheels or the Gordon Food Pantry and donations may be sent in care of Chamberlain-Pier Funeral Home, PO Box 366, Gordon, NE 69343.