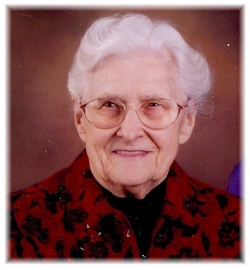 Helen Leona Nelson Swayne was born on Oct. 20, 1920, near Gordon, Neb., to Alvin and Blanche (Lein) Nelson.  Deep snow and cold weather hindered the doctor from being present for the occasion.  In years following, two sons were born into the family.  The oldest son, Junior, died of a heart condition at the age of 15 and the youngest, Richard, died in infancy.  Helen grew up in the Fieldside community north of Gordon, and attended Fieldside School through the eighth grade.  She graduated from Gordon High School in 1938.  After completing a short course from the Chadron Normal Training Program, she taught children in several rural Sheridan County school districts.

In August 1948, Helen married George Martin Swayne, a carpenter, and moved with him to Kearney, Neb.  During the 17 years they lived and built homes there, her two children, Mary Helen and Kenneth, were born.  In February 1964, the family moved back to her father’s farm and ranch north of Gordon.  Helen enjoyed country living and the various duties that came with it. Although she was an excellent homemaker, who also willingly helped with many ranch activities, an outstanding mark in her life was her love and respect for God and His Word.

In February 2014, ill health forced her to enter Countryside Care in Gordon, Neb., where she greatly benefited from the loving care of the staff.  The family wants to express thanks to all who stood by her during her 3 1/2 years there and a special thanks to Forrest and Lillian Nelson, who faithfully visited her nearly every Sunday evening during those years.