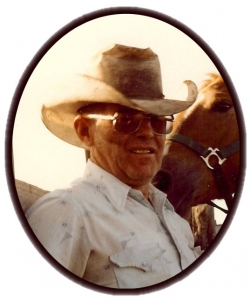 Dale grew up in the sandhills with his three brothers: Glen, Wayne and Blaine, also known as Red and Whitie.  Just imagine having the sandhills of Nebraska as your backyard.  It has been told there were few “blowouts”, windmills, lakes or meadows that have not been explored by the “Piper boys.”

Trips to town were rare and money was scarce, so these four young boys learned to entertain themselves with what was available.  They were quite ingenious creating sling shots, swings, stick horses and other homemade toys and games.

A memorable Christmas morning found their stockings filled with BB guns.  Four boys plus four BB guns would lead to fun and dangerous times.  BB gun wars on foot and horses, not to mention, target practice with their mother’s chickens, resulted in the guns being put on the “shelf” only for viewing until a promise of better behavior was fulfilled.

As these young men grew up, they forged life-long friendships with their neighbors of the sandhills.  Card parties, barn dances and brandings were all anticipated social events for Dale.

In 1951 Dale joined the United States Navy during the Korean War.  During his world tour aboard the USS Colwell, he saw many ports.  He said it was quite the adventure; it was the best of times but also the loneliest of his life, being so far from family.  After four years of service, he came home to Nebraska with a strong appreciation of the life we are afforded living in the United States of America.  He often reminded his family, that in this country we really do not know poverty and should be very grateful for what we have.

In 1955, Dale returned to the sandhills and began ranching with his father.

Also that year, at a Christmas dance in Merriman, Neb., he met his future wife, Geraldine “Jerri” Ann Ostrander.  This young, good-looking fella swept her off her feet with his charm and smooth “two-step”.  They were married May 28, 1956, in Scottsbluff, Neb.

Dale and Jerri celebrated 61 years of marriage in 2017, a true testimony of the commitment to their vows, “For better or for worse and also in sickness and in health.”

Two children joined their family, daughter Rhonda in 1957 and Michael in 1959.

Raising their children and trying to make a living always has its ups and downs.  To provide for extra income Dale would trap in the winter and contract hay in the summer.  For as long as any of us can remember he would contract to put up hay for the U-Cross Ranch, later known as the Fawn Lake Ranch.  Many present at today’s memorial probably have worked for or have memories of working in the hayfield under the watchful eye of Dale Piper.  The crews were worked hard, fed well and taught that a hard day’s work never hurt anyone.  Hay season ended with Dale’s straw hat being thrown in the last stack and a cold beer and steak supper awaited the crew. A job well done!

Dale and Jerri retired in 2000, after a life-long career of ranching.  They enjoyed some traveling, camping and fishing.  Many summer evenings found them at the ball fields enjoying a good game of baseball or softball that their grandchildren were playing in.

Dale “Liked” many things: a good horse, lot’s of grass, high cattle prices, a good hand of cards, a shot of “good” whiskey, and a good fishing day. But what he LOVED was his family.

Dale lived a simple life and will be remembered for his generosity, humility, hospitality and humor.