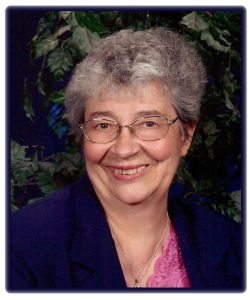 Funeral services for LaVonne Esther Flueckinger will be held at the United Methodist Church in Gordon, Neb., on Monday. Aug. 7, 2017, at 2 p.m. with burial at Fairview Cemetery in Rushville, Neb.

LaVonne Flueckinger passed away Thursday, Aug. 3, 2017, at Pioneer Manor in Hay Springs, Neb. LaVonne was born March 22, 1936, at Martin, S.D. She was the only child of Cecil and Flossie (Leeper) Burd. She grew up helping her folks with the ice plant and electric company in Martin, S.D. LaVonne would go with her dad in the airplane and would help him fly it under his supervision.

LaVonne graduated from high school at Bassett, Neb. While she was living in Bassett, she met Charlie Kelly and they were married in 1954 and to this union three children, Tony, Connie and Dale were born. Later LaVonne married Walter Flueckinger on Feb. 25, 1973, and their only child, Sonja was born.

LaVonne worked at various nursing homes caring for the residents and also bringing them into her home for family meals once a year. She enjoyed cooking for her family and baking for the holidays. LaVonne enjoyed her family reunions and traveling to other states to the reunions for both of her mom and dad sides of the family. She loved to play cards, especially solitaire and would often change the rules of the game in order to win. LaVonne belonged to Rebecka Lodge and the American Legion Auxiliary.

She moved to Pioneer Manor in Hay Springs where the care she received and love expressed by the staff and residents was beyond words. The family is grateful for the way they cared for their mom. She enjoyed life there and died peacefully in their care.

LaVonne is survived by her children Tony Kelly, Connie Nelson, Dale Kelly, Sonja (Kory) Hooper, 11 grandchildren and 10 great-grandchildren. LaVonne was preceded in death by her parents, husband Walter and grandsons Ryan and Lane.