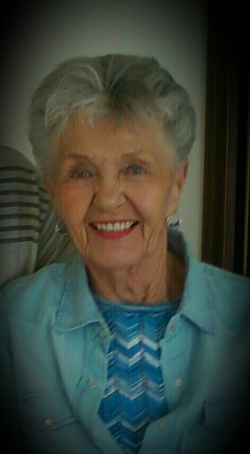 Doris Mae Anthony, 89, of Chadron, Neb., peacefully slipped into Heaven on Tuesday, Aug. 22, 2017, at Belleview Heights in Aurora, Colo.  Her CELEBRATION OF LIFE service will be held at the church of their membership, Chadron First Baptist Church (802 Chadron Ave), Friday, September 1 at 10:30 a.m. with Pastor Aaron Sprock officiating. Come enjoy as family and friends reminisce by sharing favorite memories of her. Following the service a delicious meal is being served by the gracious ladies of First Baptist! (She and husband will be buried together in the Alliance Nebraska Veterans Cemetery at a later date.)

Doris was born May 24, 1928, in Alliance, Neb.  She was a junior in high school when the Riggins family moved to Chadron from Lexington, Neb.  Lifelong friendships developed as cheerleading and school dances kept her hopping! After graduating from high school in May 1946, while working at Pedersen Drug, she met and shortly married David Eugene Anthony on June 1, 1946, at Chadron United Methodist Church. Upon moving to Kansas City, Mo., Doris worked while David attended Watchmakers school. The honeymoon soon became well supervised by the arrivals of a daughter and a son in 1947 and 48!  There wasn’t anything Doris wouldn’t do for others and her talents were vast; from Jewelry store bookkeeper, Sunday School Superintendent, best cook and bread baker, to gardening, sewing, knitting, embroidery. After David retired, they lived in Scottsbluff for a few years. Doris was employed by Zoellner’s Clothing Store where she thrived as clothing buyer & managed women’s apparel. Catching the bug from David, her competitiveness on the golf courses also won her several trophies & prizes in clubhouses! Importantly though, her deepest passions were for God & her family!

The family expresses great appreciation and gratitude to Belleview Heights Alzheimer’s Special Care Center and to Sunset Hospice, both in Aurora, Co, for their extraordinary philosophy of care provided abundantly for Doris.

Thank you Newcomer Funeral Home, Aurora, Co.  ## To share a special memory or leave a message for the family, please visit www.NewcomerDenver.com .