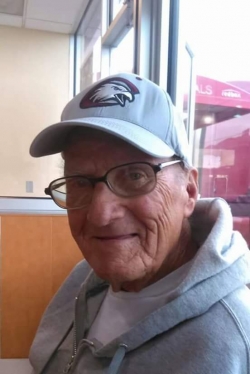 Bud was born on Aug. 22, 1930, in Rushville, Neb., to Hans and Evangeline (Aubert) Fankhauser. He was raised in Clinton, being the ninth of eleven children.  Bud graduated from Rushville High School in 1948, was drafted into the Army on Jan. 30, 1952, and was honorably discharged Jan. 6, 1954.  Upon returning home he worked for Ed White Construction building homes. During that time, the U.S. Government asked him to help build the doctors housing for the Pine Ridge Hospital where he remained employed for 30 years, retiring in 1986. He NEVER took a sick day.

In 1955 he married Mildred M. Hines in Chadron, Neb. To this union 7 children were born and raised in Rushville. Bud’s passions were his kids, grandkids and great grandkids, with whom he spent his time outdoors hunting and fishing with them by his side.

“Nothing is better than collecting a paycheck, watching a ballgame and drinking a cold Pepsi Cola.”

He is preceded in death by his parents, sisters Helen, Ruth, Irene, Opal, Betty and Lorraine and 1 granddaughter Leanne Gail.

Funeral services will be held on Friday, Sept. 1, 2017, at 2 p.m. at Chamberlain-Pier Funeral Home in Gordon, Neb. Burial with Military Honors will be held in Fairview Cemetery in Rushville, Neb.

A memorial has been established for Storybook Island and donations may be sent in care of Chamberlain-Pier Funeral Home, PO Box 366, Gordon, NE 69343.